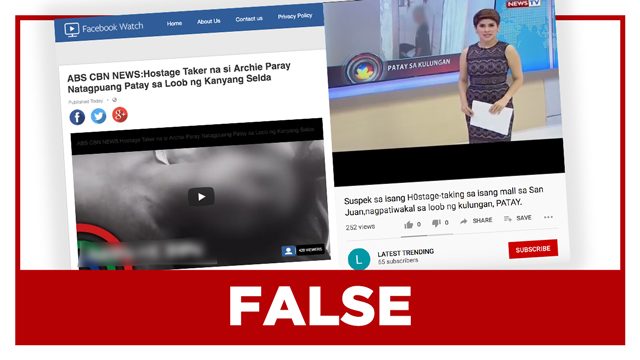 Facebook Twitter Copy URL
Copied
ABS-CBN News and GMA News did not report the hostage taker's death, nor did any other legitimate news sites The article only contained a video with a thumbnail of a blurred black-and-white photo of a man. The video also used the ABS-CBN logo.

Separately, another video posted by Youtube channel Latest Trending claimed that Paray committed suicide inside his jail cell. The video’s thumbnail appeared to be a GMA News report with a photo of Paray.

The article and the video were both flagged by Facebook Claim Check, a monitoring tool that detects viral posts with potentially false information. According to social media tool Crowdtangle, the article was posted 9 times on Facebook by pages and groups with a collective total of over 1.1 million followers.

The facts: ABS-CBN News and GMA News did not report on Paray’s death, nor did any other legitimate news sites.

The website that posted the false claim used a video report of the death of Genesis Argoncillo which occurred in 2018. Argoncillo died in police custody after being beaten to death.

Upon checking the Youtube link of the video, it redirected to ABS-CBN’s TV Patrol report on the death of Argoncillo in 2018.

Meanwhile, the Latest Trending video was a GMA News report on the apparent suicide of Joselito Cortez, one of the suspects in the Bulacan massacre that occurred in 2019. The channel was previously fact-checked by Rappler for posting a video that falsely claims Sarah Geronimo’s mother died. Latest Trending also posted other celebrity death hoaxes, including those of Rowan Atkinson and Vanessa Bryant.

Paray was arrested for holding 55 people hostage for 9 hours at the Greenhills Shopping Center on Monday, March 2. The San Juan City Police Office filed 5 charges against Paray, including frustrated murder and illegal detention.