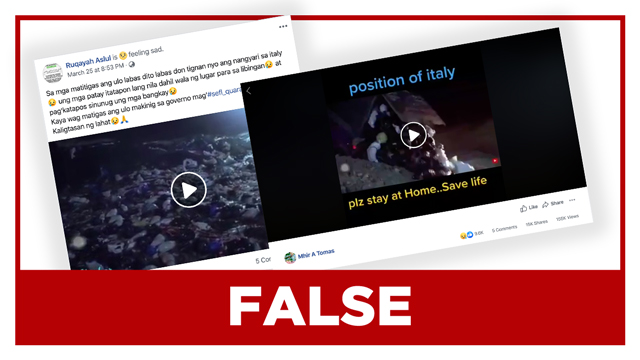 Claim: Dead bodies of coronavirus patients are being discarded now in mass graves in Italy, according to a 23-second video clip that has gone viral on social media.

Throughout the video, a reporter’s voice was heard. “Though unsubstantiated by state and the authorities, we now have information from a knowledgeable source that the city’s temporary morgues are filled beyond capacity. Mass graves have been dug for the incineration and burial of the dead. The current death toll due to the riptide virus is now in thousands.”

Claim Check, Facebook’s monitoring tool, flagged at least 19 Facebook pages and accounts that posted the video and said in the captions that it was the situation in Italy right now. The earliest post was shared on March 26.

The facts: The video clip was from the US miniseries Pandemic released in 2007.

The miniseries is about the outbreak of the “riptide virus,” a fictional virus that is an offshoot of the bird flu. The news reporter in the video clip mentioned the name of the virus, not COVID-19.

Italy has a soaring number of COVID-19 fatalities, but there are no reports of using mass graves yet as of writing. Many of Italy’s COVID-19 casualties are being buried alone because funeral gatherings are not allowed anymore.

A news report from CBS News on March 27 said that priests are permitted to say a prayer at burials and only close family members can attend, but in most cases, even close family members are not allowed to be near the dead at all, especially if the casualty’s 15-day isolation period is not yet over.

A Reuters report also said some coffins were transported to less overwhelmed provinces in Italy for burial.

As of Thursday, April 2, Italy has registered over 13,000 deaths due to the coronavirus, the highest death toll in the world. – Pauline Macaraeg/Rappler.com