Apr 10, 2020 5:50 PM PHT
Rappler.com
Facebook Twitter Copy URL
Copied
The quotes in these graphics featuring key personalities and fictional characters are made up 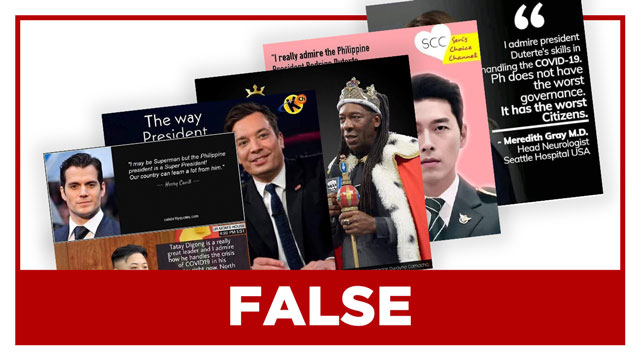 Claim: Various graphics in the form of quote cards show personalities praising President Rodrigo Duterte for his administration’s response to the coronavirus outbreak. The quotes in some of these graphics also denounce Duterte’s critics.

Some also quote people such as “Meredith Gray M.D.,” the “king” or “prince” of Sweden, “King Jafari Bukaruti” of Zimbabwe, “North Korean Captain Ri Jeong Yheok,” and others.

According to Facebook’s Claim Check dashboard, these graphics were first posted around March, as the coronavirus outbreak started to greatly affect the Philippines. These graphics have been shared by multiple Facebook users since, with some captions and comments showing support for the President.

A Facebook user, for instance, collected 4 such graphics in a post on Tuesday, April 7, and lamented in her caption that Filipinos “keep on criticizing Duterte” and “keep on complaining,” unlike foreigners who “appreciate what he’s doing.” 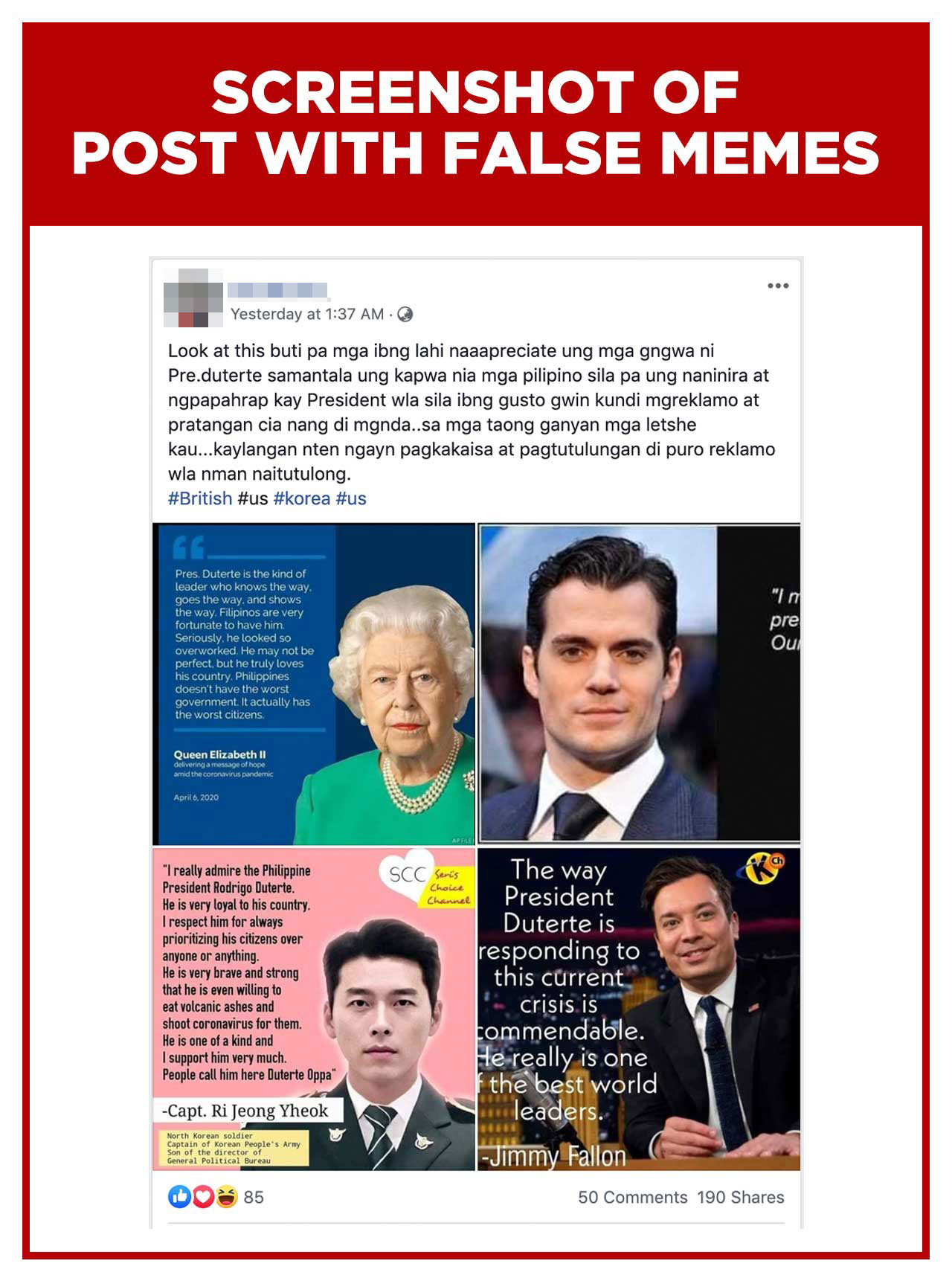 In the comments section of the post, however, is a mixed crowd: some agreed with the Facebook post, while others noted that these quotes were “fake.” 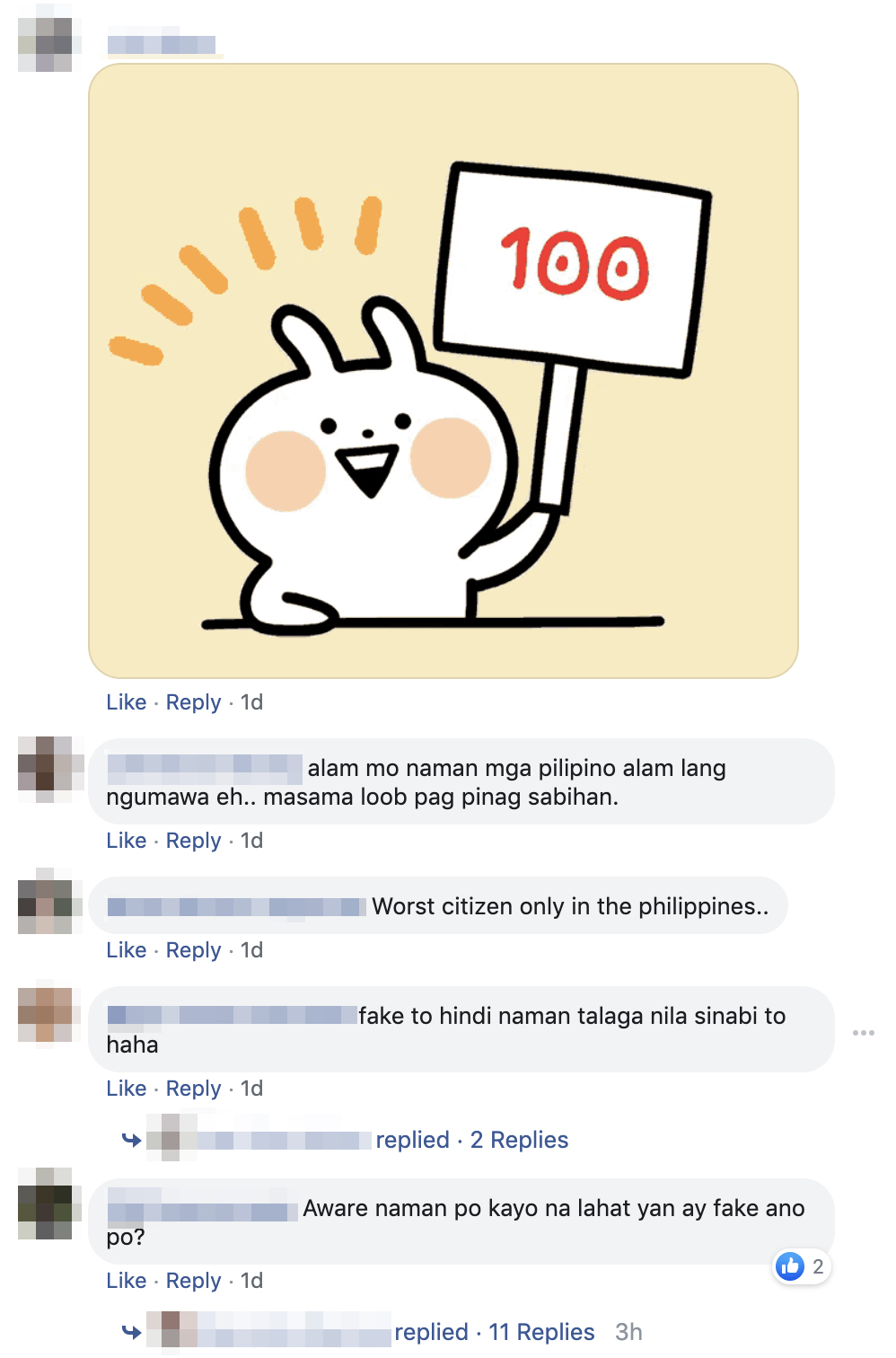 Many Rappler readers also emailed some of these social media posts to the Fact Check team.

The facts: The quotes in these graphics are made up. Some of the graphics in this category may have been meant to be a parody.

For world leaders and other influential figures used in these graphics, online users can check through Google search or check out official statements to see whether they really said the quote or not.

Queen Elizabeth II and Kim Jong Un did not issue the quotes or statements about Duterte in these quote cards. On Tuesday, April 7, Rappler published a fact-check article debunking the quote attributed to Queen Elizabeth II in one of these graphics.

As for the graphic featuring Kim Jong Un, it appears to be satirical because the quote on it used “Tatay Digong,” which is a local nickname for Duterte, and the text “Ur Mom’s House” at the upper right corner.

There are also no news reports or official sources that support the quotes attributed to Hollywood personalities Henry Cavill, Jackie Chan, and Jimmy Fallon.

Some of the personalities quoted were characters from works of fiction.

For instance, a Facebook user shared a graphic featuring “King Jafari Bukaruti” of Zimbabwe, who supposedly said that Duterte is “leadership personified” and “will go down as one of the greatest presidents in history.” In his caption written in Cebuano, the user criticized those who were against Duterte.

In the comments section, though, some recognized the “king” as professional wrestler Booker T, who had played a royal character going by the name King Booker. 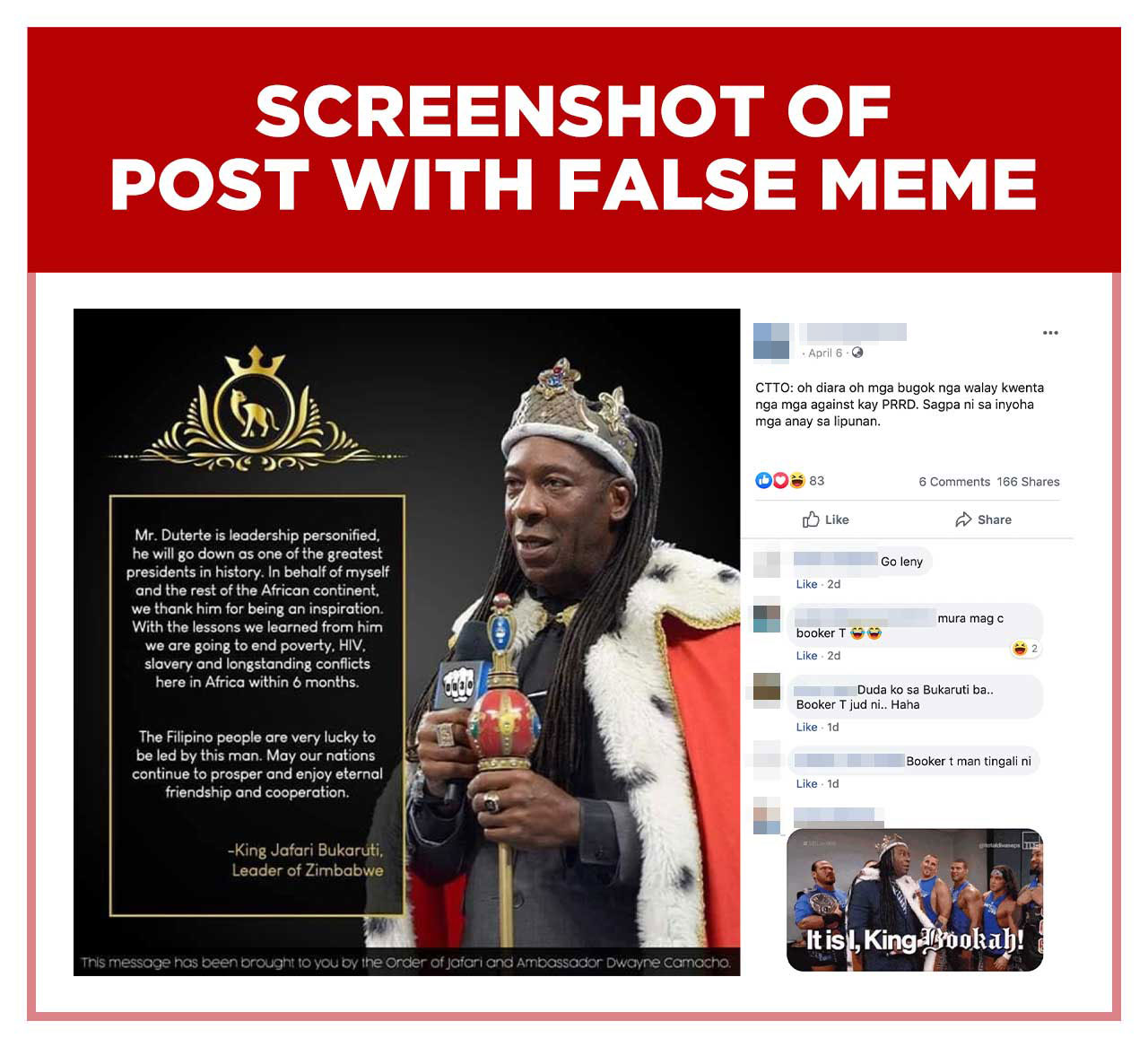 As Facebook’s Claim Check dashboard shows, some users only focused on the quote on the memes when they shared it, and may not have recognized or did not check who the people on these graphics were.

The following characters and personalities have been used in such memes: