FALSE: Photo of former NUJP chair ‘connects’ her to CPP-NPA-NDF 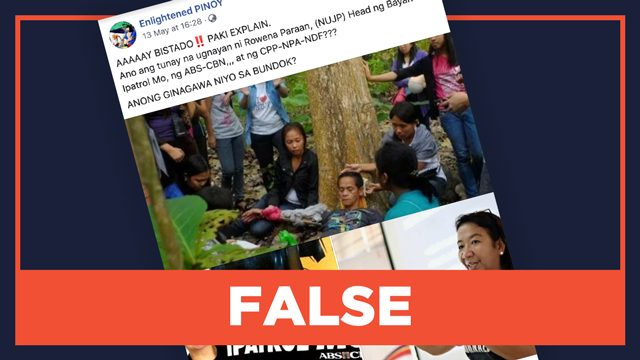 The post featured an image of Paraan and other women in a forested area surrounding what appeared to be an injured man.

(What is the real connection between Rowena Paraan (NUJP, Head of Bayan Mo Ipatrol Mo of ABS-CBN) and the CPP-NPA-NDF. Does ABS-CBN know this?)”

The same photo and caption were posted by the Facebook page Enlightened Pinoy on Wednesday, May 13. It has since received 473 reactions, 92 comments, and 395 shares. Enlightened Pinoy is followed by 84,721 people as of this posting. The facts: The photo in the post was taken at an all-women media safety training in Cagayan de Oro City, which took place from March 16 to 17, 2013. (READ: Former NUJP chair red-tagged in social media post)

The photo has been identified by Mindanews as a photo for an article that they published in March 17, 2013 titled “Women journalists, media workers gather for 1st all-women safety training.” It was taken by photojournalist Vic Kintanar.

Running a reverse image search shows that the Mindanews 2013 article is the first article online that includes this photo of Paraan.

Paraan was the lead trainer at the event and conducted simulation exercises on administering first aid to injured persons.

NUJP has held regular media safety training sessions, which include safety and security tips during and outside of coverage and simulation exercises, for more than 10 years. The facilitators of these exercises are journalists, security experts, police, and military officials.

The NUJP has denounced the post as red-tagging, saying on their official social media accounts, “It is utterly shameless but dangerous that a historic media safety training aimed at protecting and ensuring the safety of media workers is being used to malign, threaten, and put journalists and the NUJP in danger.”

Paraan herself also spoke the post on her Facebook account, saying that it endangered not only her, but all the journalists who were at the 2013 training.

Rappler has fact checked the page Enlightened Pinoy at least 4 times in the past. Our fact checks on their posts can be found below: