FALSE: OFW in Saudi beheaded after testing positive for coronavirus 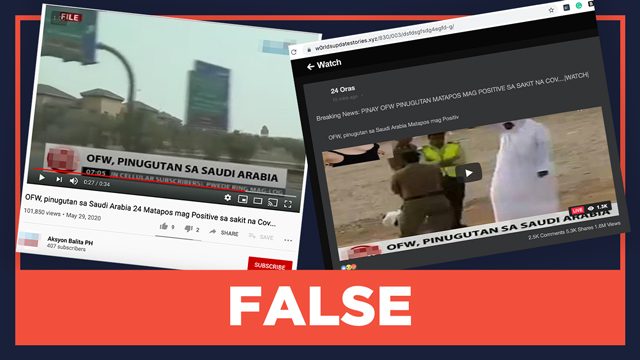 Claim: A female overseas Filipino worker (OFW) in Saudi Arabia was beheaded after testing positive for COVID-19, the disease caused by the novel coronavirus.

This claim originated from websites w0rldsupdatestories.xyz and updatingnewstotheworld.xyz. At least 10 unique links from these two websites were flagged by Claim Check, Facebook’s monitoring tool. The links were shared as early as May 29.

The video then stopped to ask the reader to share the link to “uncover” the rest of the clip. YouTube channel Aksyon Balita PH uploaded the clip that was embedded in the web pages. The video’s title also claimed that the OFW was beheaded after testing positive. It had 101,850 views on YouTube as of writing.

A reader emailed the claim to Rappler for verification.

The facts: The news clip embedded was from a 2015 report by GMA News – way before an outbreak of the novel coronavirus was first reported in Wuhan, China in December 2019.

There were no recent reports from any legitimate news organization about the beheading of a female OFW in Saudi after testing positive for the coronavirus.

Rappler found the full and original news clip uploaded on the verified YouTube channel of GMA News. It was posted on March 9, 2015, and was about the beheading of Joven Esteva, a male OFW executed after he was convicted for murdering his employer.

The original report also cited former foreign affairs spokesperson Charles Jose, who confirmed the beheading of Esteva in 2015. Jose is now the Philippine ambassador to Malaysia as of June 2020.

YouTube channel Aksyon Balita PH had also uploaded videos containing hoaxes in the past, such as the supposed deaths of actors John Lloyd Cruz and Robin Padilla. Though it used the logo of GMA News in its icon, it was not listed as a featured channel by GMA News’ official YouTube account. The number of Filipinos abroad who tested positive for COVID-19 had reached 5,184 as of May 31. – Pauline Macaraeg/Rappler.com