FALSE: Tanduay and Zonrox mix can be used as alcohol 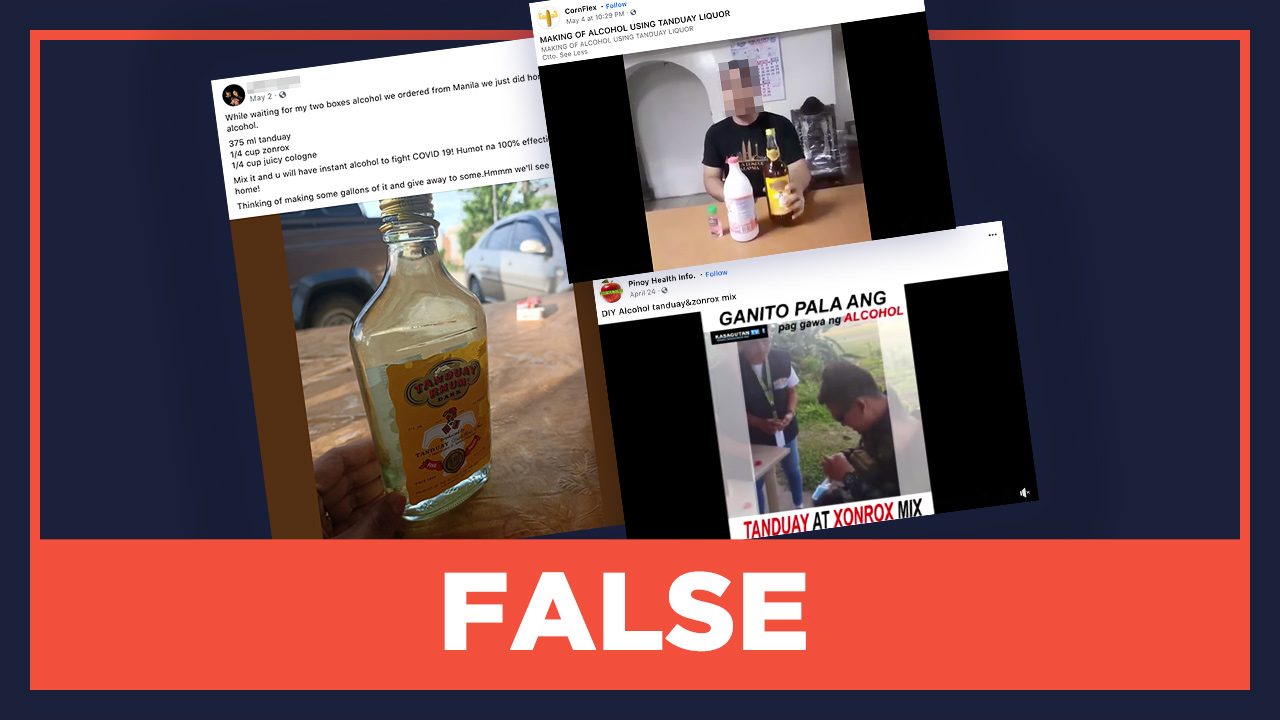 Facebook Twitter Copy URL
Copied
Experts and companies involved issued warnings about the mixture, saying it could 'form a dangerous chemical that has toxic effects' and 'may cause serious harm'

Claim: A mixture of Tanduay, Zonrox, and other products like cologne and hand sanitizer can be used as alcohol or hand sanitizer.

Several users posted videos mixing the products and touting it as homemade alcohol or hand sanitizer that could be used as a measure against COVID-19. The claim circulated as early as March and was still being viewed as of posting.

This claim was spotted on Facebook by Rappler’s fact check team.

The facts: Experts and companies involved issued warnings against the mixture saying it could “form a dangerous chemical that has toxic effects” and “may cause serious harm.”

The country’s Food and Drug Administration released guidelines on pharmacy compounding of alcohol-based hand sanitizer, which states that compounding shall only be conducted by registered and licensed pharmacists employed by licensed retail drug outlets.

The Integrated Chemists of the Philippines (ICP) addressed the claim that alcohol products like rum and vodka with bleach can be used as hand sanitizer, saying that these alcoholic products lack the concentration necessary for a hand sanitizer and that the hypochlorite in bleach can cause skin irritation and inflammation.

“Such products which are below the required 70% alcohol concentration should NOT BE USED as hand sanitizer. The preparation of hand sanitizers using bleach or hypochlorite should be done by trained professionals, such as chemists, pharmacists, chemical engineers, or medical technologists,” ICP’s statement read.

ICP is the accredited professional organization of registered chemists and chemical technicians under the Professional Regulation Commission.

Moreover, Green Cross Incorporated, the company that produces Zonrox, also released a statement on the claim, saying the solution is “not acceptable” as a disinfectant. “Mixing bleach with ethyl alcohol (present in rum) will form a dangerous chemical that has toxic effects if ingested, inhaled, or absorbed through skin,” it said.

Tanduay Distillers, Inc. also posted an advisory against mixing Tanduay Rhum with bleach, hand sanitizer, or other chemicals. “To be clear, this WILL NOT produce a viable disinfectant against the COVID-19 virus. On the contrary, this may cause serious harm, therefore should not be attempted,” it said.