FALSE: Photo of world’s biggest anaconda in the Philippines 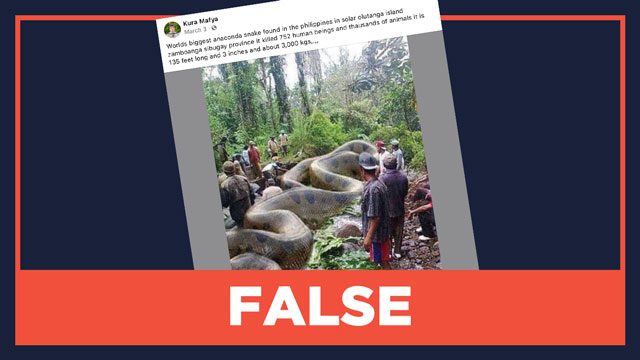 Facebook Twitter Copy URL
Copied
There are no reports of such a sighting, and the photo was manipulated

Claim: A photo shows the world’s biggest anaconda found in the province of Zamboanga Sibugay, Philippines.

An image of a large snake surrounded by people was posted on Facebook with the caption: “[World’s] biggest anaconda snake found in the Philippines in [Solar, Olutanga Island,] Zamboanga Sibugay province. [It] killed 752 human beings and [thousands] of animals. [It] is 135 feet long and 3 inches and about 3,000 kgs.” The photo has been posted several times even as early as 2015, and is being circulated again as of posting.

This claim was flagged by Facebook’s Claim Check, a tool for detecting posts with potentially false information.

The facts: There are no reports of such a sighting in Zamboanga Sibugay, and the photo was manipulated.

No official news organizations have reported a large anaconda being found in the province of Zamboanga Sibugay, nor were there any reports of numerous deaths caused by an anaconda in this location.

The measurements provided are also exaggerated. According to National Geographic, South America’s green anaconda is the largest snake in the world, and it can measure 20 to 30 feet and weigh up to 550 pounds or around 249.5 kilograms. This is a far cry from the 135-foot, 3,000-kilogram anaconda indicated in the claim.

The photo used to make the false claim has also been fact-checked by other organizations in the past. Factly and Snopes found that the photograph was manipulated from an image of a regular anaconda. – Loreben Tuquero/Rappler.com