FALSE: COVID-19 not real, Bill Gates behind the disease 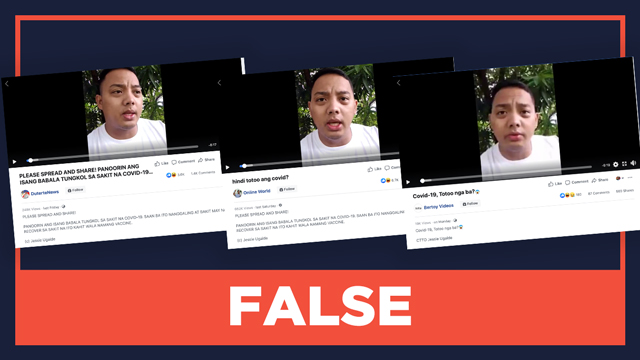 Claim: The cases of COVID-19, the disease caused by the novel coronavirus, is not real and was planned by US billionaire Bill Gates to push the use of vaccines and microchip implants.

A video that circulated on Facebook contained this claim. The Facebook pages that reposted the video credited a certain Jessie Ugalde for the post. According to Ugalde, a 2015 video of Bill Gates proves that the billionaire already predicted the coronavirus pandemic.

(Bill Gates already said back in 2015 that we should prepare for COVID. There’s a video of it on YouTube. Why, is he God? God is the only one who knows of the things to come.)

Ugalde also said that Gates is in charge of the World Health Organization (WHO) and that he wants everyone to be implanted with a microchip with the number 666. He said COVID-19 really means “certification of vaccination identity,” and questioned why many people recover from the disease despite having no vaccine yet.

At least 3 Facebook pages that reposted Ugalde’s video were flagged by Claim Check, Facebook’s monitoring tool. The posts combined had 10,478 reactions, 3,883 comments, and 26,379 shares as of writing. They were viewed over 923,000 times.

The original upload is no longer publicly available on Ugalde’s profile.

While there is an existing video of Gates talking about virus outbreaks in a TED Talk in 2015, he never mentioned COVID-19 in his speech. Instead, he was urging the people to prepare for the next possible epidemic and suggested putting resources into scenario planning, health worker training, and vaccine research. He cited the approach used during the Ebola outbreak in 2014 as an example.

In June, Rappler already debunked a claim that said Gates is developing COVID-19 vaccines with microchips. Gates said he has “never been involved in any sort of microchip-type thing.” There are also no official reports on studies being done on a COVID-19 vaccine that will inject people with a microchip.

Reuters and Associated Press have previously debunked the claim that COVID-19 is an acronym for  “certification of vaccination identity” back in April and May. Both organizations said that the claim is baseless.

COVID-19 was named by WHO back in February. “Co” stood for “corona,” “vi” for “virus” and “d” for “disease.” WHO said it was named as such to avoid stigmatization and association of the disease with a specific geographical location, animal species, or group of people. The US Centers for Disease Control and Prevention also acknowledges this name.

As for recoveries, scientists have explained that human bodies have the capability to fight off viruses that enter the body by producing antibodies that can kill the viruses. But some factors such as age and underlying conditions such as obesity and diabetes can affect the body’s capability to do so.

As of Friday, July 10, more than half a million people have died due to COVID-19. – Pauline Macaraeg/Rappler.com