Facebook Twitter Copy URL
Copied
The article where the graphic came from was published in 2020 and was only about an ordinance in Cebu City. The city gov't has also suspended the registration since June 2020 due to the pandemic. 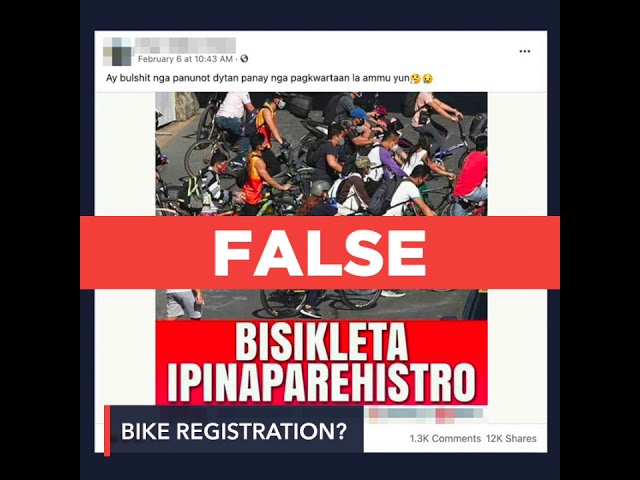 A graphic saying “BISIKLETA IPINAPAREHISTRO” (bicycles need to be registered) circulated on Facebook in February 2021. The graphic had the logo of daily tabloid Abante Tonite.

The comments on the false post showed that people mistook the graphic to mean that the directive is being implemented nationwide. The caption and the comments also showed that people thought the implementation of bicycle registration is just a means for the Land Transportation Office (LTO) to obtain more fees from citizens.

This is false. Although Abante Tonite really reported on the topic in June 2020, the graphic was reposted and shared out of context in February 2021 by several Facebook accounts and pages.

Meanwhile, the LTO only requires accredited importers, dealers, or owners to register their motor vehicles. Bicycles are not included.

In 1973, the Cebu City local government passed Cebu City Ordinance No. 801 or the Traffic Code of Cebu City. This includes a provision requiring registration of bicycles in the city, but this was not strictly implemented before because bicycles were not frequently used then.

Cebu City Mayor Edgardo Labella temporarily suspended the registration of bicycles on June 6, 2020, through Executive Order No. 80. This decision came after the city imposed quarantine restrictions due to the pandemic, which resulted in limited public transportation. The temporary suspension of bicycle registration was part of the Cebu City government’s efforts to support its residents and workers during community quarantine.

However, Labella said all persons operating or riding bicycles must still follow the other regulations under the Traffic Code of Cebu City.

The posts containing this false claim circulated in the first and second weeks of February. It was spotted by the Rappler team on Facebook. As of writing, the posts had over 12,000 combined shares, 3,800 reactions, and 1,300 comments. – Owenh Toledo/Rappler.com