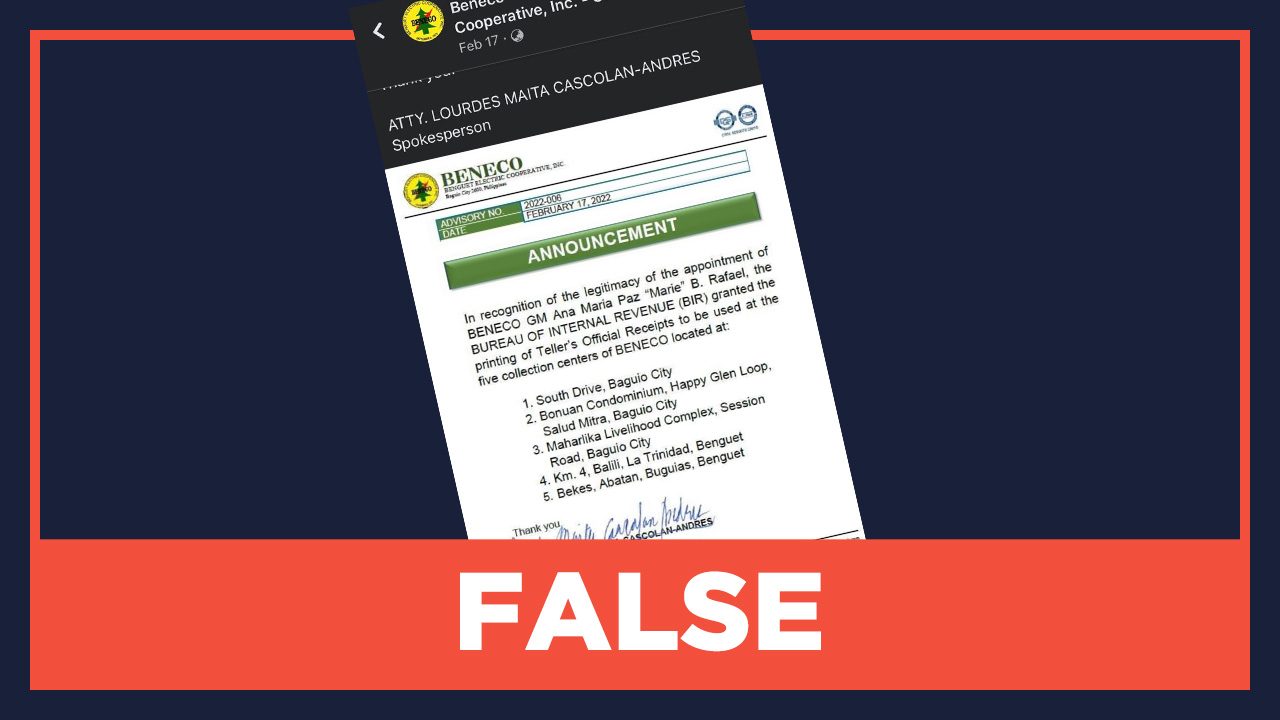 Facebook Twitter Copy URL
Copied
'The BIR is not in a position to recognize or determine who between lawyer Rafael and Engr. [Melchor] Licoben is the legitimate General Manager,” says BIR-CAR Regional Director Douglas Rufino

In an announcement posted on the Facebook page of the Benguet Electric Cooperative on February 17, spokesperson Lourdes Marta Cascolan-Andres claimed that the Bureau of Internal Revenue (BIR) recognized Ana Maria Rafael as the legitimate general manager of Beneco.

“In recognition of the legitimacy of the appointment of BENECO GM Ana Maria Paz ‘Marie’ B. Rafael, the BUREAU OF INTERNAL REVENUE (BIR) granted the printing of Teller’s Official Receipts to be used at the five collection centers of BENECO,” said the February 17 post.

BIR-CAR Region clarified that this was not the case.

“While the BIR is cognizant of the fact that there is currently a leadership dispute within BENECO, the matter is internal to BENECO and the BIR is not in a position to recognize or determine who between Atty. Rafael and Engr. [Melchor] Licoben is the legitimate General Manager,” said the statement signed by Regional Director Douglas Rufino.

He explained that their office was aware that some member-consumer-owners (MCOs) were paying their bills at collection centers under Rafael’s control.

“Thus, in order to protect the interest of the MCOs, as well as to ensure the proper collection of tax revenues, we have granted the request for Authority to Print Receipts of Atty. Rafael,” he said.

Beneco currently faces a leadership row between Rafael, who is backed by the National Electrification Administration (NEA), and Licoben, who was designated by majority of the Beneco board of directors and supported by the employees’ union. The Court of Appeal has yet to decide on the case filed in relation to the dispute. – Sherwin de Vera/Rappler.com

Sherwin de Vera is a Luzon-based journalist and an Aries Rufo Journalism Fellow.

Keep us aware of suspicious Facebook pages, groups, accounts, websites, articles, or photos in your network by contacting us at factcheck@rappler.com. You may also report dubious claims to #FactsFirstPH tipline by messaging Rappler on Facebook or Newsbreak via Twitter direct message. You can also message us via our Viber fact check chatbot. Let us battle disinformation one Fact Check at a time.