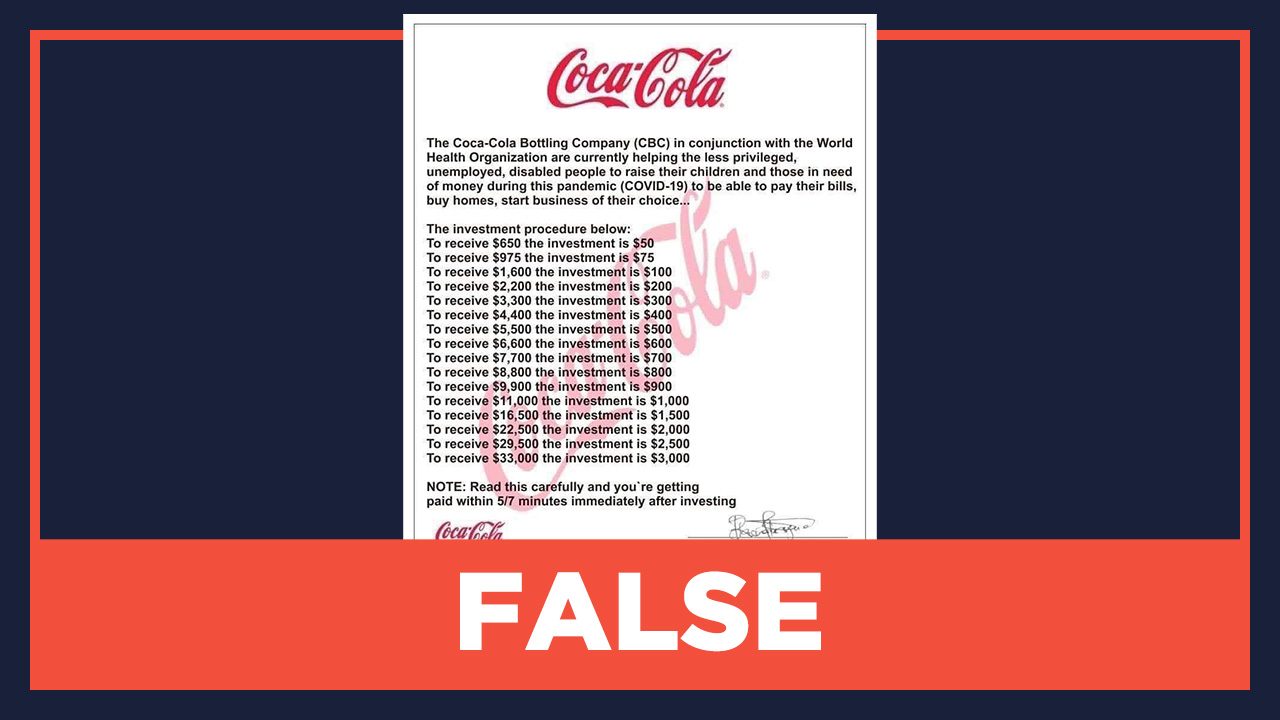 Facebook Twitter Copy URL
Copied
Official websites and Facebook pages of The Coca-Cola Company do not have announcements about any investment program for people affected by COVID-19.

An image claims that American multinational beverage corporation “The Coca-cola Bottling Company (CBC)” partnered with the World Health Organization (WHO) for an investment program for people affected by COVID-19.

A text in the image says, “The Coca-cola Bottling Company (CBC) in conjunction with the World Health Organization (WHO) are currently helping the less privileged, unemployed, disabled people to raise their children and those in need of money during this pandemic (COVID-19) to be able to pay their bills, buy homes, start business of their choice.”

Below the text is a list of the potential amount of earnings from the “investment procedure” and a note that says the reader will be paid within five to seven minutes after investing.

The company logo of the Coca-Cola company can be seen at the top of the image and is also used as a watermark. The signature of a supposed “director of certification” appears at the bottom right side of the image.

The claim was submitted to Rappler through email for checking.

The official Facebook page and the official website of Coca-Cola Philippines do not have any announcements and posts regarding an investment program for people affected by COVID-19.

The official website of The Coca-Cola Company – that’s the correct name of the mother company of Coca-Cola Philippines – also does not have any posts about an investment program on its investor’s page.

The Coca-Cola Foundation, the primary international philanthropic arm of The Coca-Cola Company, also did not have an investment program on its list of contributions for the coronavirus.

For information about The Coca-Cola Company’s official programs and activities, refer to its official Facebook pages and official websites. – Lorenz Pasion/Rappler.com