Facebook Twitter Copy URL
Copied
Doctors have no way of manipulating the COVID-19 tally, since the number of those who test positive come from laboratories certified by the health department and the Research Institute for Tropical Medicine using RT-PCR tests 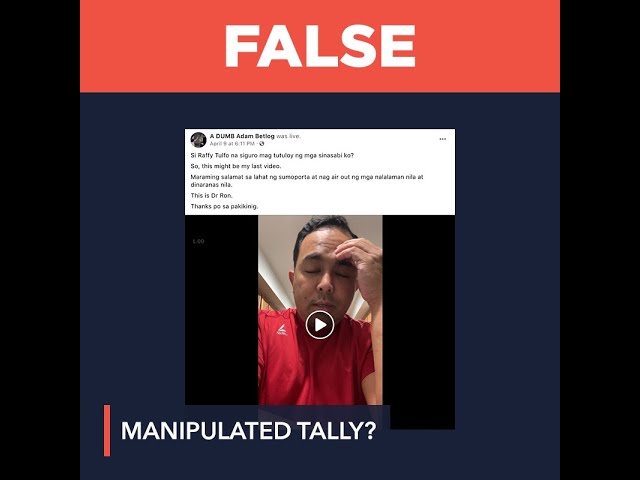 A video posted on April 9 by Facebook page “A DUMB Adam Betlog” falsely claimed that doctors had been manipulating data to convert non-COVID-19 cases into active COVID-19 cases in the national tally.

In the video, physical therapist Ron Samaniego reiterated previous claims he posted on his former Facebook page, “Bantayan Network by Dr. Ron,” which has since been taken down. In a mix of English and Filipino, Samaniego said, “The matter is, the exact fact is, the figures being released by the DOH aren’t real because the statistics are being manipulated by doctors converting non-COVID cases into COVID.”

The Facebook page “A DUMB Adam Betlog” has over 11,400 followers and as of writing, and the video has garnered over 43,000 reactions, 13,000 comments and 18,000 shares. Similar claims have been made by Samaniego or more commonly known as “Dr. Ron,” since March, according to social media monitoring tool CrowdTangle.

Doctors have no way of manipulating the data. According to the DOH, confirmed cases are those tested positive by a DOH-RITM-certified lab. In the national tally of COVID-19 cases, the DOH has been using the results of real-time reverse transcription polymerase chain reaction tests since 2020. RT-PCR tests are the more reliable option for determining the presence of the virus, at the expense of being less affordable than the rapid antibody tests and yielding a longer time for processing results at approximately 24 to 48 hours.

On March 30, the DOH announced the inclusion of positive rapid antibody tests in the “NCR Plus” region of Metro Manila, Bulacan, Rizal, Laguna, and Cavite in the national count. Rapid antibody tests are used in these “outbreak areas” where, according to the DOH, the RT-PCR tests may not be able to keep up with the spread of the virus.

The Philippines also conducts “risk-based testing,” wherein local government units do house-to-house visits to identify those who have symptoms of COVID-19, subject them to RT-PCR testing, and isolate immediately if found positive.

Swabs collected from RT-PCR tests at COVID-19 testing centers set up by the DOH and the RITM – the Philippines’ national reference laboratory for infectious and tropical diseases – are monitored, screened, and validated according to a process that spans days. Even if the sample from the swab tests positive, it is still subject to a confirmatory test before the results are released. The released results are encoded and sent to the Regional Epidemiology Surveillance Unit that then forwards them to hospitals, and are collated in the national tally.

On April 4, the DOH published a graphic on their official Facebook page debunking Samaniego’s other false claims. Samaniego is also not part of the Philippine Physical Therapy Association Incorporated, and on April 6 the organization released a statement against his videos containing false information and circulating on social media.