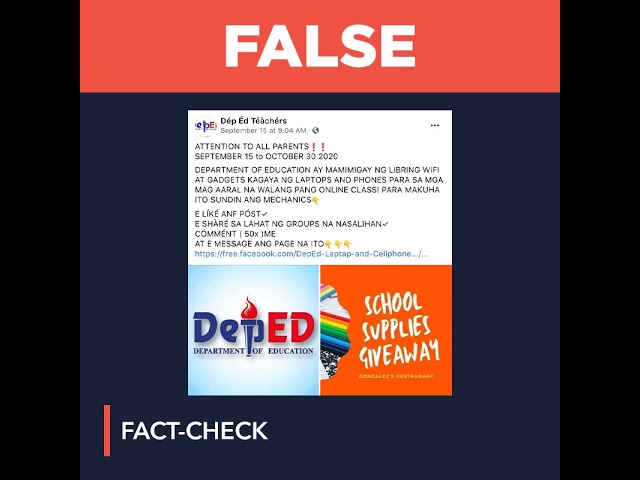 The Department of Education (DepEd) is giving away free WiFi and gadgets for students without means to attend online classes.

This claim was spotted by the Rappler fact check team on Facebook.

DepEd is not conducting any such activity. It warned the public not to fall for scams.

The agency debunked posts and messages of accounts claiming to represent DepEd, which called for entries for WiFi and/or gadget giveaways by following certain mechanics.

The DepEd added that learning continuity packages donated by local government units and legitimate partners will be distributed to students and teachers through DepEd’s regional and division offices and schools.

DepEd added that those responsible for such scams and other similar fraudulent activities related to the opening of classes may be reported to action@deped.gov.ph.

In the past, Rappler fact-checked other posts offering money and freebies, such as a supposed raffle promo by Palawan Pawnshop and free load from Globe Telecom. – Loreben Tuquero/Rappler.com