TRUMP. US President Donald Trump speaks during election night in the East Room of the White House in Washington, DC, early on November 4, 2020. Photo by Mandel Ngan/AFP

Facebook Twitter Copy URL
Copied
The vote counting is still ongoing. There is also no evidence of election fraud as of writing. 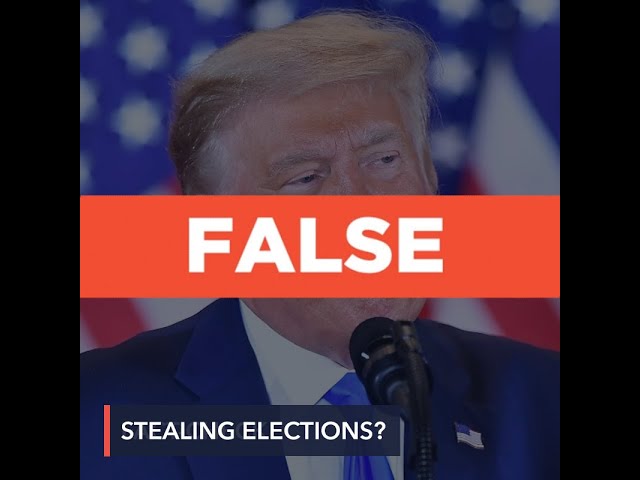 US President Donald Trump claimed in a speech on Friday morning, November 6 (Philippine time), that he won through “legal votes” and that his opponents are trying to steal the election.

Trump further cited as examples of electoral fraud the instances when he was winning in some states, but saw the votes slowly being “whittled down” – such as in Pennsylvania.

These claims are false. The vote count is still ongoing as votes – including mail ballots – are still being counted in key states that have not yet been called. There is no evidence of election fraud as of writing. (READ: LIVE UPDATES AND RESULTS: Trump vs Biden – US presidential election 2020)

As of 2:20 pm, November 6, Biden leads the race with 264 electoral votes while Trump has 214. There is still no officially declared winner yet.

Trump’s claim that there are “illegal votes” is also unsubstantiated. The US election is legitimate, including the mail-in voting system. The National Conference of State Legislatures compiled each state’s absentee and mail voting policies in effect for the 2020 election.

As for the “whittled down” votes, it is normal for one candidate to be winning initially only to be overtaken by another candidate during the vote-counting process.

US media also cut off the live broadcast of Trump’s speech and called him out over his false claims on electoral fraud. Among the channels that did this were cable channel MSNBC, NBC News, ABC News, and USA Today. (READ: US media cut off, call out Trump’s election fraud lies on live TV)

A 2017 study by the Brennan Center for Justice showed that the rate of voting fraud overall in the US is less than 0.0009%. “A look at the facts makes clear fraud is rare, and does not happen on a scale even close to necessary to ‘rig’ an election,” it said.

On November 4, Trump previously claimed that he had already won the US election in 2020. This was also rated false. – Pauline Macaraeg/Rappler.com