FALSE: Duterte signs law to start school year at the end of August 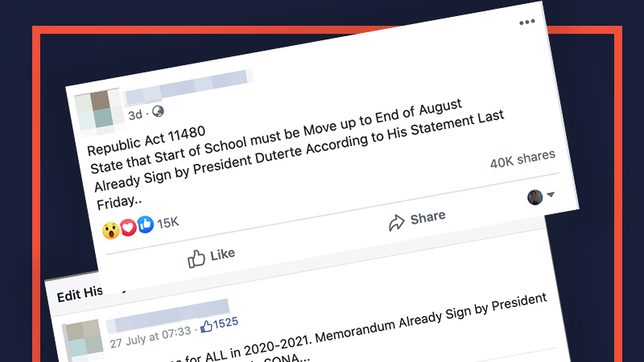 President Rodrigo Duterte has signed a law to move the start of the school year to the end of August.

The post read, “Republic Act 11480 State that Start of School must be Move up to End of August Already. Sign by President Duterte According to His Statement Last Friday.”

The post has over 15,000 reactions and 40,000 shares, as of writing. Searching for the text of Parilla’s post on Facebook returns several posts by other users using the exact same copy.

This post was flagged as potentially false or misleading by Facebook’s fact checking tool Claim Check.

Republic Act 11480 allows the president to start the school year later than the last day of August in the event of an emergency or calamity.

This law amends Section 3 of Republic Act 7797, which requires classes to start no later than the last day of August.

Republic Act 11480 adds to this, saying, “Provided, that in the event of a declaration of a state of emergency or state of calamity, the President, upon the recommendation of the Secretary of Education, may set a different date for the start of the school year in the country or parts thereof.”

This law covers grade schools and high schools, including foreign or international schools. The start of classes may be set nationwide or specific to parts of the country.

Duterte signed this law on Friday, July 17, not July 24, as stated in the post.