FALSE: Duterte officially chooses Revillame to run for Senate in 2022 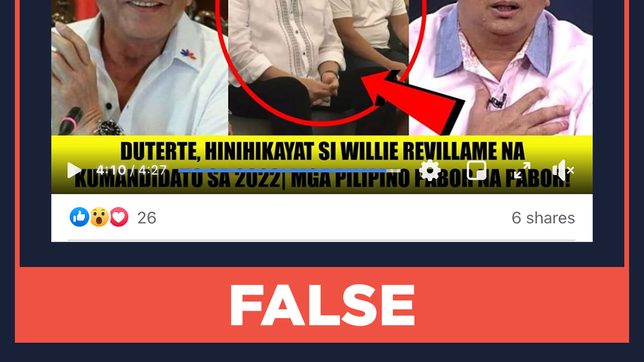 Facebook Twitter Copy URL
Copied
Duterte has not made any official announcement on endorsing Revillame as senator in 2022, though the two reportedly had dinner together in Malacañang

President Rodrigo Duterte has officially chosen GMA’s “Wowowin” host Willie Revillame as a senatorial candidate for the 2022 elections, according to a video on the Facebook page “Showbiz Fanatics.”

This was posted on the “Fact-checking in the Philippines” Facebook group for verification. Rappler has fact-checked at least 11 posts by the “Showbiz Fanaticz” Facebook page and their corresponding YouTube channel in the past.

This claim is false. As of Friday, April 9, Duterte has not publicly said that he has chosen Revillame as a senatorial candidate for the 2022 elections.

Revillame reportedly had dinner with Executive Secretary Salvador Medialdea and Senator Bong Go on February 27, according to Philippine Star columnist Ricky Lo. According to Lo, Duterte wanted to tell Revillame to “keep his options open.” Revillame’s mention of the meeting during his show sparked speculations, said Lo, on whether he would run for vice president or senator.

Pep.ph also published two reports about a March 16 dinner in Malacañang with Revillame, Duterte, and Go.

Pep.ph’s report published on March 18 said Duterte asked Revillame if he could help the country in a bigger way, insinuating that he run for office. Revillame replied that he would think about it. Pep.ph also speculated that he could run for either vice president or senator.

In its report published on March 23, Pep.ph said there was no talk about politics during the March 16 dinner.

Neither Lo nor Pep.ph confirmed that Duterte had officially chosen Revillame to run for senator in 2022. – Vernise Tantuco/Rappler.com