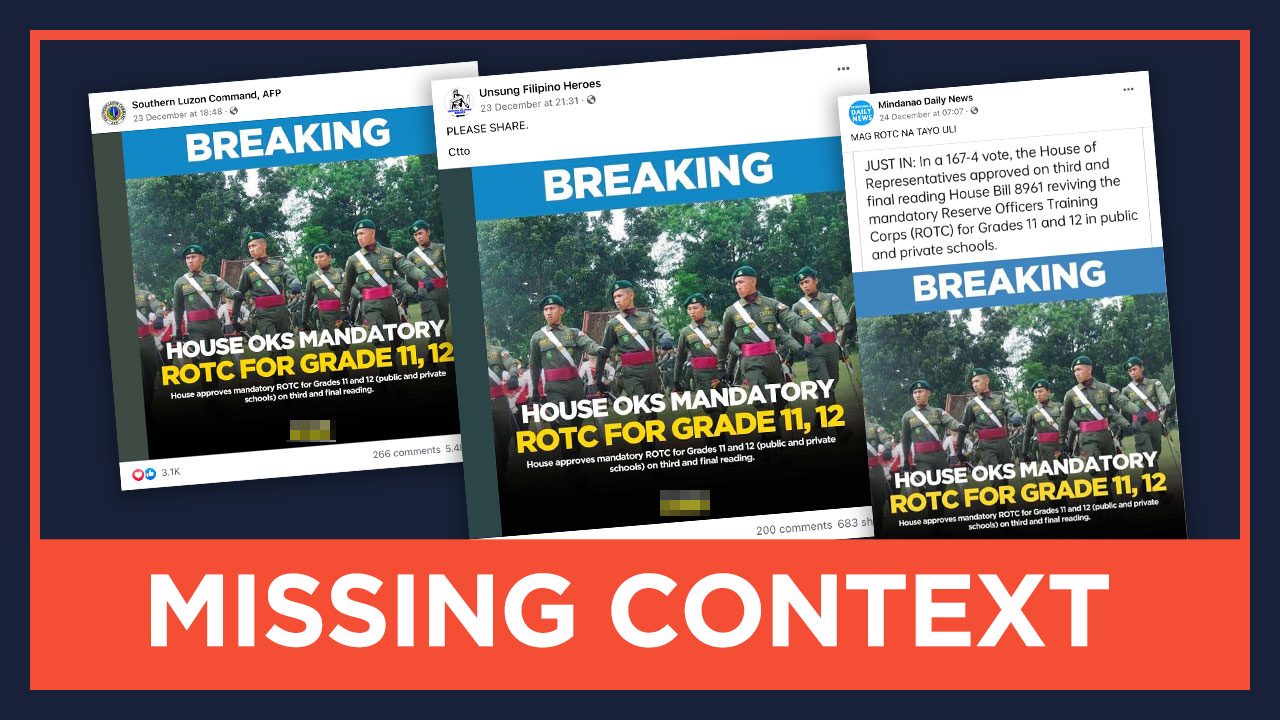 Facebook Twitter Copy URL
Copied
The House approved the mandatory ROTC for Grades 11 and 12 on May 20, 2019. The photo with the 'BREAKING' label does not pertain to news in December 2021.

On December 23 onwards, a photo about mandatory Reserve Officers’ Training Corps (ROTC) for Grades 11 and 12 was spreading on several Facebook pages and accounts. The photo, which was originally from the Philippine Star, said “HOUSE OKS MANDATORY ROTC FOR GRADE 11, 12,” and said in smaller text, “House approves mandatory ROTC for Grades 11 and 12 (public and private schools) on third and final reading.” It also had the label “BREAKING.”

The photo being spread on December 23 onwards about the news of the House’s approval of mandatory ROTC is missing context.

The photo was originally from a May 20, 2019, post on the official Facebook page of Philippine Star. It does not pertain to recent news, which makes the sharing of the photo with the “BREAKING” label misleading.

The bill under consideration, as stated in the Facebook post and the corresponding Philstar.com report on May 20, 2019, was House Bill 8961, which would indeed make ROTC mandatory for Grades 11 and 12 if passed.

Other news reports of the event include those by Rappler, Manila Bulletin, CNN Philippines, and GMA News, all on May 20, 2019, as well. Meanwhile, the corresponding House of Representatives press release was dated May 26, 2019.

Vera Files also had an article published on May 26 about the spread of the claim in a misleading way.

ROTC is not mandatory in the Philippines, following the murder of Mark Welson Chua in 2001 by ROTC cadets in the University of Santo Tomas. Chua had revealed corruption in the ROTC program there. The law that made ROTC optional was Republic Act 9163, the National Service Training Program (NSTP) Act of 2001, which was approved on January 23, 2002.

Rappler has fact-checked claims mentioning ROTC before, such as a claimed photo purporting that the Kabataan Partylist supports ROTC, the claim that ROTC was made voluntary under the time of former president Corazon Aquino, and the claim that the entire Israeli population and the entire South Korean male population undergo mandatory military service made in a post from the Duterte Youth Party-list Facebook page supportive of the revival of mandatory ROTC. – Percival Bueser/Rappler.com