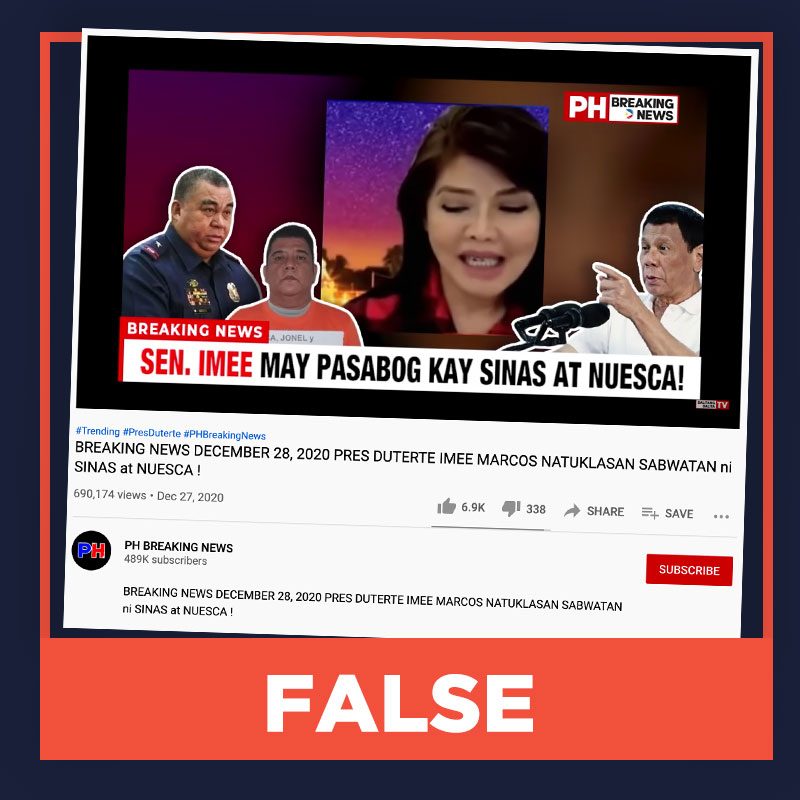 Facebook Twitter Copy URL
Copied
The senator is only questioning how Nuezca managed to get away with all the misconduct in his records, and is suggesting that he might have benefited from the 'padrino' system in the PNP 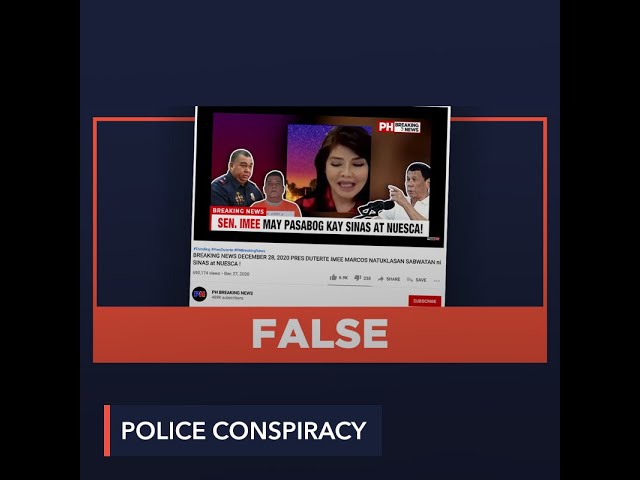 Nuezca is currently detained at the Paniqui Municipal Jail, where he is awaiting trial for two counts of murder for killing mother-and-son Sonya and Frank Gregorio in Paniqui, Tarlac, last December 20. During his arraignment on January 7, he pleaded not guilty.

The title of the false video said, “BREAKING NEWS DECEMBER 28, 2020 PRES DUTERTE IMEE MARCOS NATUKLASAN SABWATAN ni SINAS at NUESCA (Imee Marcos discovered the connivance between Sinas and Nuezca)!” The video also had a news ticker that said the senator has something to reveal about the two cops. It was uploaded on December 27.

This is false because the content of the video did not support the claim in the title. Sinas was never mentioned in the entire video, which was taken from a 12-minute interview of Marcos in the DZXL program Straight to the Point on December 23.

Instead, Marcos brought up Nuezca’s previous administrative cases and suggested that the Tarlac cop might have benefited from the padrino system (political patronage) in the police force.

“’Di ako makapaniwala na may pulis na ganyan kaangas kung walang padrino (I can’t believe that a policeman could be this arrogant without having a padrino),” Marcos said. She cited Nuezca’s administrative cases prior to the Tarlac shooting incident, which included two homicide cases that were dismissed due to lack of evidence.

She also questioned how Nuezca has managed to get away with all the misconduct in his records since 2013, including refusal to be tested for illegal drug use. “Naka-pitong taon na siyang bad behavior tapos dalawa murder pa o homicide. Nako, palaging lack of evidence. Ano’ng lack of evidence doon, tinakbuhan ‘yung drug test?”

(He’s been known to have bad behavior for 7 years, but his cases were always dismissed for lack of evidence. How could there be a lack of evidence when he ran away from a drug test?)

Marcos then suggested that Nuezca’s supervisors be placed under investigation, too. She also criticized the PNP’s implementation of the rules for administrative cases.

As of writing, there have been no official reports or evidence that Sinas and Nuezca colluded with each other.

The false video had over 690,000 views as of writing. Data from social monitoring tool CrowdTangle showed that the video also gained over 4,000 Facebook interactions. – Jerome Sagcal/Rappler.com