FALSE: Palparan did not get media attention in prison before SMNI interview 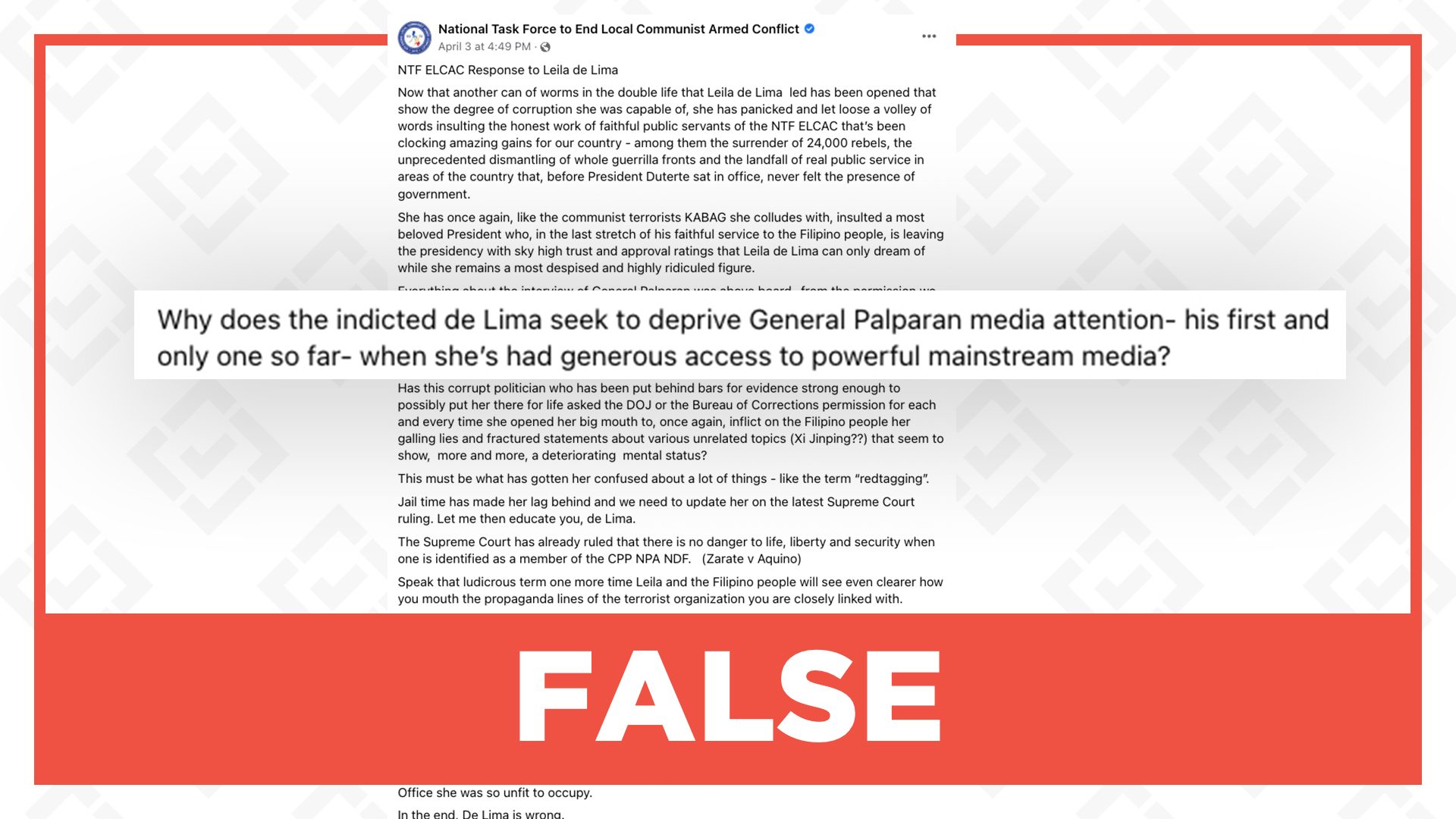 A post on the official Facebook page of the National Task Force to End Local Communist Armed Conflict (NTF-ELCAC) on April 3 stated that convicted general Jovito Palparan did not get media attention in prison before his interview with SMNI network aired on March 30, 2022.

Palparan was found guilty on September 17, 2018, for the kidnapping and serious illegal detention of two University of the Philippines students. (READ: Mothers of disappeared UP students hit Badoy interview honoring Palparan | Lawyers: Palparan has been getting ‘special treatment’ in Bilibid for 3 years)

The post, which was attributed to NTF-ELCAC spokesperson Lorraine Badoy, serves as a response to a recent statement made by Senator Leila de Lima on April 1 regarding red-tagging, Badoy, and the Palparan interview with SMNI.

The claim is found in the middle of the post and reads: “Why does the indicted de Lima seek to deprive General Palparan media attention- his first and only one so far- when she’s had generous access to powerful mainstream media?”

The claim about Palparan’s absence of “media attention” while imprisoned before the March 30 SMNI interview is false.

While in prison, Palparan was interviewed by blogger Mocha Uson on August 22, 2019. It was uploaded on August 23, 2019, on her Facebook page “MOCHA USON BLOG.” A link to Uson’s interview can be found in an August 26, 2019, article in InterAksyon. Vera Files also mentioned some of the content of the interview, along with the link near the end, in a September 9, 2019, article.

As of writing this fact check, the video of Uson’s interview with Palparan already has about 42,000 reactions, 6,500 comments, 34,000 shares, and 1,900,000 views. Just as in Palparan’s recent interview with SMNI, the interview with Uson was lambasted by various organizations, such as the human rights group Karapatan and lawyers’ group National Union of People’s Lawyers (NUPL).

Uson, who previously had stints in the Presidential Communications Operations Office and the Overseas Workers Welfare Administration, is now running in the 2022 elections as the first nominee of the party-list Mothers for Change (MOCHA).