Facebook Twitter Copy URL
Copied
Although Quezon City Mayor Joy Belmonte confirmed that Angel Locsin did not coordinate with them before the event, she said that she doesn’t want to blame the actress and ‘nobody wanted what happened’

Facebook page “Philippines trendinh news .” – with the misspelled “trending” and the period – uploaded a video on April 26 that falsely claimed Quezon City Mayor Joy Belmonte has ensured that Angel Locsin will be held accountable for the mishap in the community pantry the actress set up on her birthday.

Locsin organized a community pantry in celebration of her 36th birthday in Barangay Holy Spirit in Quezon City on April 23, where a senior citizen passed out while waiting for his turn to get goods and was declared dead on arrival after he was rushed to the hospital.

The original video was uploaded on YouTube by channel “Showbiz Fanaticz” on April 25. As of writing, the two videos had over 186,000 combined views both on Facebook and YouTube.

The claim that Belmonte made sure Locsin will pay for the community pantry mishap is false.

In an interview with The Chiefs on TV5 on April 23, Belmonte said that she was not blaming Locsin for what happened, but added that it could have been avoided if the actress had coordinated with the local government unit prior to the event.

“I don’t want to blame Angel. I like Angel, she has a very good heart. Nobody wanted what happened,” Belmonte said.

The mayor also admitted that the incident raised the chances of COVID-19 spreading. It became difficult to control the crowd due to the huge number of people in line, and physical distancing protocols were disregarded.

The QC government also appealed to the actress and her team to coordinate with authorities if they know of individuals who need to get tested. Still, there are no official news reports or statements released by Belmonte saying that Locsin will pay for what happened.

The actress immediately issued a public apology for the crowd chaos on April 23 and pledged to support the family of the senior citizen who died. (READ: Angel Locsin apologizes for crowd chaos after man dies in community pantry queue) 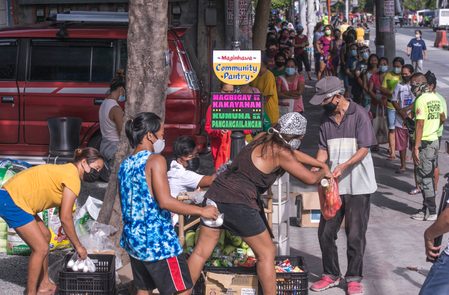 On April 27, Rappler fact-checked a related claim that said President Rodrigo Duterte got angry at Locsin over the controversy surrounding her community pantry. This is also false. – Pauline Macaraeg/Rappler.com