FALSE: Labor contractualization did not exist during Marcos era 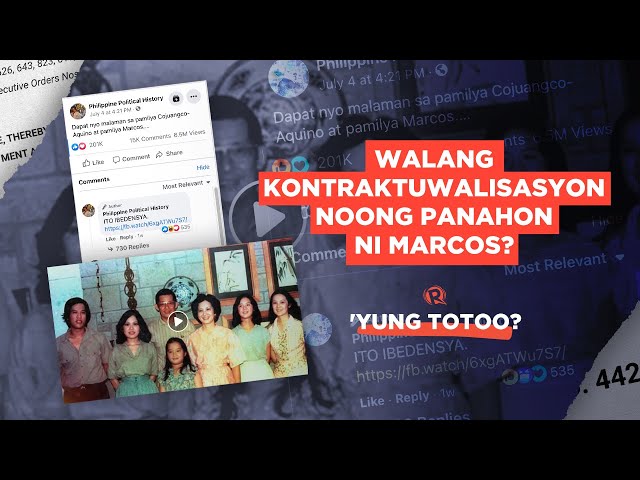 A video posted on July 4 by Facebook page “Philippine Political History” falsely claims that labor contractualization did not exist during the Ferdinand Marcos administration.

Data from social media monitoring tool CrowdTangle show that the video has over 6.5 million views, 201,000 reactions, and 15,000 comments on Facebook, as of writing.

Labor contractualization was first adopted in Philippine law when Marcos signed the Philippine Labor Code in 1974.

The Labor Code of the Philippines allows employers to hire people under a probationary status not exceeding six months. Under the contractualization system, workers sign contracts for a period not longer than six months and, as the contracts expire, employers just renew them. This way, companies can avoid regularizing employees and giving benefits such as paid leaves and bonuses.

“Marcos signed a decree that allowed the hiring of temporary workers because the economy was unstable and unemployment was high,” Cid Terosa, senior economist at the University of Asia and the Pacific, said in a previous Rappler interview.

Since then, Philippine presidents have attempted to end the labor practice, all ending in vain.

The Civil Service Commission said that the government had over 600,000 contractual employees as of August 2020. However, Labor Secretary Silvestre Bello III earlier explained that the Department of Labor and Employment needed to hire 5,000 labor inspectors to inspect more establishments and keep track of the actual number of contractual employees.

Having only executive powers, Duterte urged Congress to amend the Labor Code. On December 1, 2020, the House of Representatives passed the anti-endo bill on third and final reading, but some lawmakers opposed this version because it still allowed legitimate job contracting and fixed-term employment.

Rappler debunked a similar claim in 2019 that said former president Corazon Aquino “removed” labor regularization during her term, which led to the increase of overseas Filipino workers. – Lorenz Dantes Pasion/Rappler.com