HEAD OF STATE. Ferdinand "Bongbong" Marcos Jr., the son and namesake of the late dictator Ferdinand Marcos, delivers a speech after taking oath as the 17th President of the Philippines, during the inauguration ceremony at the National Museum in Manila, Philippines, June 30, 2022.

MANILA, PHILIPPINES – Ferdinand Marcos Jr.’s first speech as president of the Philippines was well-written and well-delivered, with some of his critics or cynics acknowledging that it was effective in further rallying his support base. But the several false claims weaved into it didn’t escape the scrutiny of those who watched him.

Here is a compilation of the false information that Rappler spotted and debunked in his 26-minute-long inaugural speech after taking oath at the National Museum of Fine Arts on Thursday, June 30. 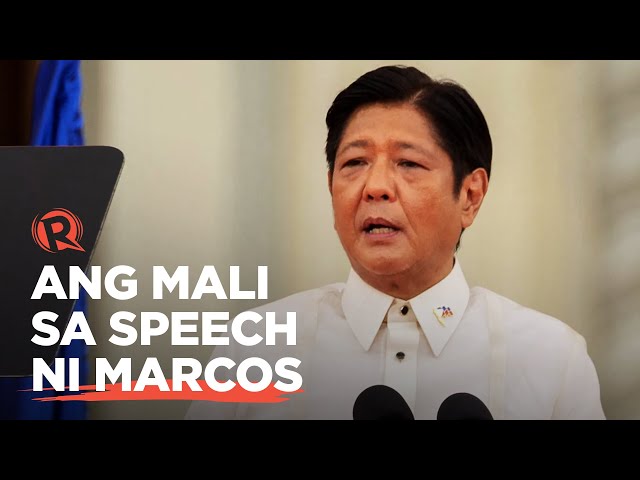 CLAIM: Marcos Jr. got the biggest electoral mandate in the history of Philippine democracy

“When my call for unity started to resonate with you, it did so because it echoed your yearnings, mirrored your sentiments and expressed your hopes for family, for country, and for a better future. That is why it reverberated and amplified as it did to deliver the biggest electoral mandate in the history of Philippine democracy,” he said.

Veteran journalist John Nery said in a panel during Rappler’s special coverage that election mandates are not based on the number of votes a candidate gets. Every election, the voters’ population increases, so it follows that the number of votes distributed among candidates also increases. Instead, mandate is based on the percentage he gets of the votes of all candidates combined.

According to the Philippine Electoral Almanac, there were three presidents, elected in four elections, who garnered mandates bigger than Marcos Jr.’s. Read here to find out who they were.

CLAIM: Marcos Sr. is the only president that delivered in terms of food security

Marcos Jr. said in his inaugural that “none but one” president delivered in terms of food security, pertaining to his father and namesake, the late president Ferdinand E. Marcos.

No administration has achieved total food self-sufficiency, which is defined as a country’s ability to produce consumption needs, like staple food crops, rather than buying and importing. Marcos’ 20-year rule brought famine, higher poverty rates, and inflation reaching 50%, all of which are additional measures of a country’s capacity for food self-sufficiency. CLAIM: Fossil fuel-free technologies for economies not yet invented

On the topic of addressing the rising prices in global oil markets, Marcos said in his inaugural that sufficient fossil fuel-free technologies for whole economies had not yet been invented and rich countries were not attempting to achieve it with current technology.

Sweden, one of the global leaders in developing renewable energy, is already on its path to becoming the first fossil-fuel free nation by 2050.

Other advanced economies – such as Germany, Portugal, and Japan – have also committed to this global campaign to reach net zero emissions by investing in renewable energy industries and technology.

CLAIM: The Bangui Bay Wind Farm was a project of Marcos Jr.

“Blades have been turning over the sand dunes of Ilocos Norte, harnessing a power all around but unseen, long before this day. I built them.” Marcos said, clearly referring to his time as governor of Ilocos Norte.

Marcos Jr. was pertaining to the Bangui Bay Wind Farm in Ilocos Norte, usually cited by his supporters as one of his greatest achievements. Marcos repeatedly uses the wind farm not only as a symbol of his legacy as a politician but also as a symbol of progress that he promises to give the country once he wins the presidency.

However, the famous wind farm was not his project. It was built by NorthWind Power Development Corporation, based on a wind mapping study conducted by the National Renewable Energy Laboratory in 1996. – Rappler.com