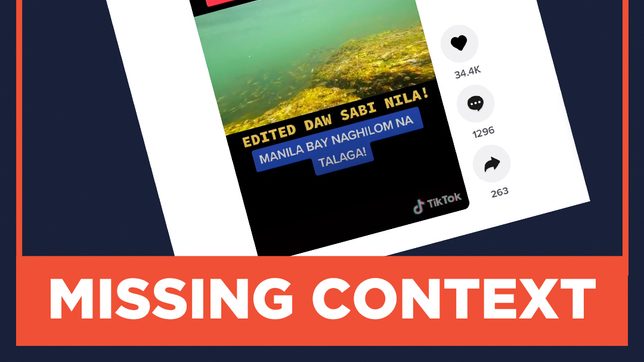 Facebook Twitter Copy URL
Copied
While the rehabilitation project has helped, reports and studies show that the area has been teeming with marine life even before the project started in 2019

A video uploaded on May 21 by TikTok user “mangyanpadyakero” claims that the rehabilitation project of the Department of Environment and Natural Resources (DENR) has finally healed Manila Bay. It shows a video clip where shrimp and a group of small fish are swimming in the bay.

The video was spotted via social media monitoring tool CrowdTangle. It has over 34,400 likes, 1,296 comments, and 263 shares on TikTok, as of writing.

Though polluted and in really bad shape in some areas, the entire Manila Bay ecosystem was never declared biologically dead prior to the start of the rehabilitation project in 2019, according to environmental group Oceana Philippines.

It is not clear where exactly in Manila Bay the clip in the TikTok video was taken.

The DENR Environment and Management Bureau states on their website that Manila Bay is a major fishing ground beyond the port area. “Commercial, municipal and artisanal fisheries are common in the bay,” the agency says.

A research published in 2017 in the Philippine Journal of Fisheries recorded a total of 146 fish and invertebrate species from an experimental trawl fishing survey conducted in Manila Bay from 2014 to 2015, with species of anchovies and sardines consisting most of the catches. However, the research also pointed out that six dominant species showed signs of overfishing.

A photo taken in 2017 by the Philippine News Agency also shows that traditional fishing in the area was already common even before the government started the rehabilitation project. The photo shows a local fisherman selling his catch along the Roxas Boulevard shoreline.

Residents were also reported in 2017 to be fishing in the bay’s breakwater at the tip of Roxas Boulevard, where threadfin salmon, grouper, mullet, croaker fish, red snapper, and rockfish were caught.

The DENR said in January 2019 that the Manila Bay rehabilitation would have three phases: cleanup/water quality improvement, rehabilitation and resettlement, and education and sustainment.

In 2019, DENR Undersecretary Benny Antiporda acknowledged that the cleanup, which was the first phase of the rehabilitation, would not be completed during Duterte’s term. He said that the next administration would have to “carry on the current efforts.” – Lorenz Dantes Pasion/Rappler.com