FALSE: Manila ordinance for temporary closure of malls in March 2021 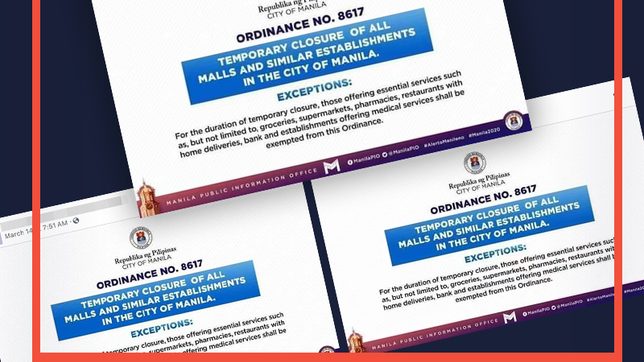 Facebook Twitter Copy URL
Copied
This is an old ordinance implemented in March 2020 and is no longer in effect.

In March 2021, multiple Facebook users posted a graphic about the city of Manila’s Ordinance No. 8617, an ordinance that mandates the temporary closure of all malls and similar establishments in the city.

These posts were spotted on social media monitoring tool CrowdTangle and on Facebook.

“The said city ordinance was posted last March 17, 2020 in line with the announcement that Metro Manila will be placed under the Enhanced Community Quarantine due to COVID-19 pandemic. We would also like to clarify that Ordinance No. 8617 is no longer in effect,” his post read.

The graphic used in the claim was posted on Facebook by the Manila Public Information Office on March 17, 2020.

Following the anniversary of the first pandemic-related lockdown announcement in the Philippines, social media users have been recirculating old graphics, putting them in a false or wrong context. (READ: Year after lockdown: How pandemic restrictions look like in PH)

Rappler earlier debunked separate claims saying Cavite province is preparing for a total lockdown while Tagaytay City is under lockdown as of March 18 or 19. – Loreben Tuquero/Rappler.com