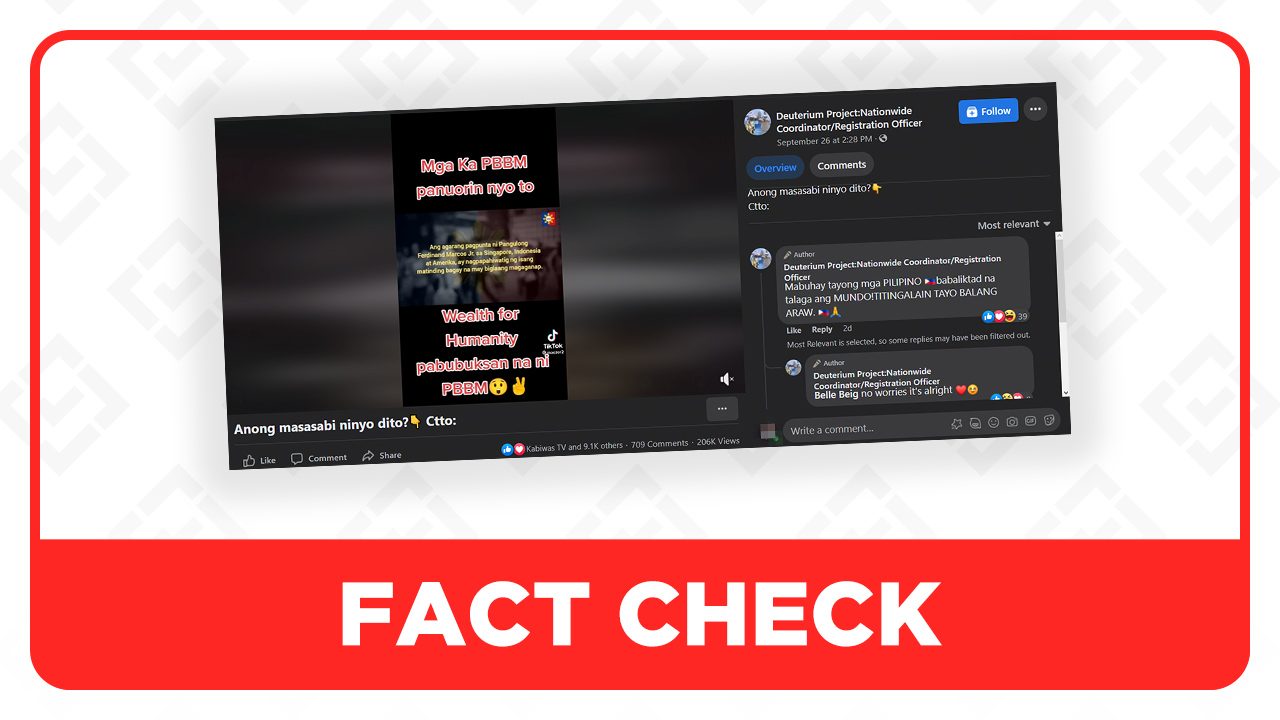 Facebook Twitter Copy URL
Copied
Marcos visited Indonesia and Singapore from September 4 to 7, 2022, for official state visits, while he visited the United States for the United Nations General Assembly

Claim: The series of trips of President Ferdinand Marcos Jr. to Singapore, Indonesia, and the United States is a sign that the Philippines is helping these governments pay off their debts.

The video containing the claim alleged that the weakening US dollar will lead to the return of the gold standard monetary system. Then the video said that the gold standard will tie the Philippine currency to gold. And because Marcos is the alleged “co-owner and co-beneficiary” of a gold reserve called the “Wealth of Humanity,” he will use it to pay for the debt of other countries. The video then said that the recent foreign trips of Marcos are evidence that he is already paying off the debt of these countries.

What happened on the foreign trips? Marcos went to Indonesia and Singapore from September 4 to 7, 2022, for official state visits to both countries where he signed multiple deals on security, defense, research, and business.

He also flew to the United States from September 18 to 24, 2022, where he gave a speech at the 77th United Nations General Assembly and had multiple bilateral meetings with world leaders on the sidelines of the UN event.

Gold standard: The claim mentions that the accepted monetary system in the world will return to the potential for the return of the gold standard system.

The gold standard is a financial system where a country’s money has a value tied to the amount of gold. However, there is no report that the current fiat monetary system is being abandoned. In the fiat system, the value of money is not backed by any commodity like gold or silver and is controlled by central banks.

According to an ABC News article published on April 24, 2012, there was simply not enough gold to return to the gold standard. US Federal Reserve Chairman Jerome Powell said in a CNBC report on July 10, 2019, that unemployment will fluctuate if the gold standard is returned.

The “Wealth of Humanity” that the claim said will be used once the gold standard returns is also false. This is based on the lie that the Marcos family owns and has access to a “million tons of gold,” a claim that has been debunked by Rappler several times before.

Far from debt free: As of end-June, data from the Bureau of Treasury showed that the Philippine government’s debt stood at P12.79 trillion.

According to a World Economic Forum report published on May 16, 2022, global debt already reached $303 trillion in 2021.  – Lorenz Pasion/Rappler.com