FALSE: Media did not report progress in Marawi rehabilitation 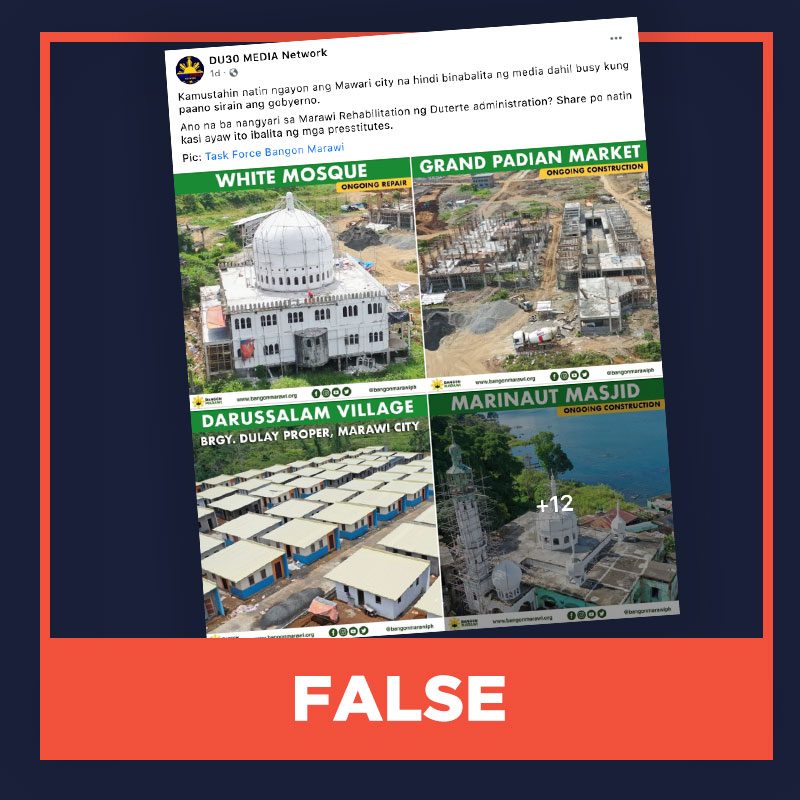 An April 28 post by Facebook page DU30 MEDIA Network falsely claimed that the media did not report on the progress of repair and construction efforts involved in the rehabilitation of Marawi City.

(Let’s now check on Marawi City which the media does not report on because they are too busy thinking of how to destroy the government. What has happened to the Duterte administration’s Marawi rehabilitation? Let’s share it because the “presstitutes” don’t want to report this.)

This claim is false. Multiple media outlets reported on these efforts.

The Manila Standard reported on April 23 that TFBM chair Eduardo del Rosario said the Marawi rehabilitation is “between 55% and 60%” accomplished. It also mentioned an update on the construction of housing units in Barangay Patani, which was included in the post.

The Philippine Star also reported Del Rosario’s update in an April 24 report, which also mentioned updates on the construction of permanent housing units in Barangay Patani, as well as the refurbishment of the Grand Mosque.

This was also reported by the Philippine News Agency.

GMA News reported on March 28 that Del Rosario said the repair work on mosques is nearing completion. On March 26, BusinessMirror reported Del Rosario saying that the Marawi rehabilitation is on track to meet the December 2021 completion deadline.

In January, Rappler published a report on rebuilding Marawi City almost 4 years after the siege.