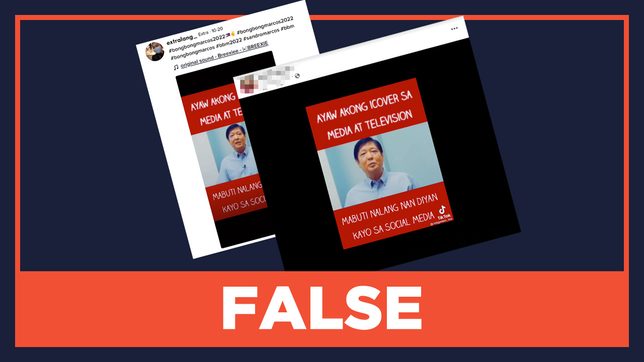 On October 20, a netizen uploaded a video on TikTok showing presidential aspirant Ferdinand “Bongbong” Marcos Jr. expressing his gratitude to his supporters for having a wide reach on social media, despite the media’s reluctance to cover him. It was accompanied by the hashtag “#bongbongmarcos2022.”

In the said video, a large text can be seen that says, “Ayaw akong icover sa media at television… Mabuti na lang nandyan kayo sa social media…” (The media and television do not want to cover me. Luckily, you have a presence on social media.)

Some netizens believed the claim, calling the media “biased” in the comment section. They also said the media’s supposed non-coverage of Marcos’ political campaign was pointless and baseless.

The full video of Marcos was originally published on April 4, 2018, on his verified Facebook page and has resurfaced on other social media platforms because of the upcoming elections in May 2022.

(This is why I am thankful to all of you. We know that the traditional media, especially on television and some newspapers, sometimes do not want to cover me. Luckily, you are on social media, you’re making your voices heard and you are always there to continuously support and to make the people see what their fellow countrymen think.)

This is different from the phrase that can be seen on the TikTok video, which says the media refuses to cover Marcos.

The media does in fact regularly cover events related to Marcos.

October 6, Rappler published a news article when he filed his certificate of candidacy. CNN Philippines also released a report regarding the endorsement of the Enrile family of Marcos’ presidential candidacy.

When Marcos announced on November 16 that Davao City Mayor Sara Duterte-Carpio would be his running mate, INQUIRER.Net also published it along with their personal statements on why they decided to team up.

News outlets such as Bulatlat also reported on the disqualification petitions filed against Marcos by a number of civic and human rights organizations. The report included an analysis of the petitioners’ defense as well as Marcos’ response to the matter.

Furthermore, the Marcos-Duterte caravan on December 8 was covered by ABS-CBN News, including an article reflecting what their supporters’ think of the two candidates.

Numerous other news reports on Marcos’ presidential run can be found through Google search and on Rappler’s “Bongbong Marcos” topic page. – Christian Bohol/Rappler.com

Christian Bohol is a Rappler Mover. This fact check was reviewed by a member of Rappler’s research team and a senior editor.

FALSE: No news reports on help given by prison inmates to Odette survivors