MISLEADING: Imee Marcos 'was a minor' during Martial Law 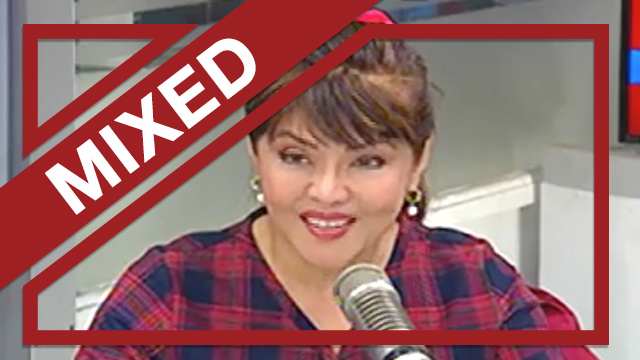 Marcos herself said this in an interview on Tuesday, January 22 with dzBB's Mike Enriquez.

Enriquez asked Marcos to clarify her and her family's position on critics who say that they should apologize for what happened during her father President Ferdinand Marcos' 14-year Martial Law rule.

In response, Marcos apologized to those who were hurt during that period, but added that an "admission of guilt" is a different matter because she was still a minor during that time.

Below is their full exchange, translated to English from Filipino:

Mike Enriquez: The people who say that you should ask for forgiveness for the events that took place when your late father, President Ferdinand Edralin Marcos, was president – we probably know [the answer] already – but for the sake of the people listening and watching this morning…please clarify your and your family's position regarding this controversy, ma'am.

Imee Marcos: Yes, from now on, I am asking for forgiveness from everyone who was hurt by the unexpected events, those who were maltreated, who were hurt in any way, really, everything, we say sorry to them. But what they're saying about admission of guilt, that's difficult, because I was of minor age, I was not a government official, and what I remember is that I would be sent to look at the price of rice, to go to Tatalon and other places like that. But I was not a government official. I just know that my dad was very troubled by the price of rice and every day I would check if one ganta was P8… and that was my only job, because if it went past P8, it would be a big problem for families. That's also what I do as a governor, maintain the low price of rice, because that's really the hardship of every family, and that's what the poor are hoping for.

Facts: Marcos was a minor when Martial Law was declared, but she was already 31 years old when her family was exiled to Hawaii after the People Power Revolution.

The People Power Revolution which overthrew Marcos' father as president took place in February 1986; Marcos would turn 31 years old in November of that year.

In the Revised Penal Code of the Philippines, Chapter 3 Article 13 states that criminal liability is mitigated for offenders "under 18 years of age or over 70 years," and identifies a person under 18 years a minor. The same is stated in Chapter 4 Article 68.

This means that for 13 out of 14 years of Martial Law, Marcos was not a minor. – Vernise L. Tantuco/Rappler.com