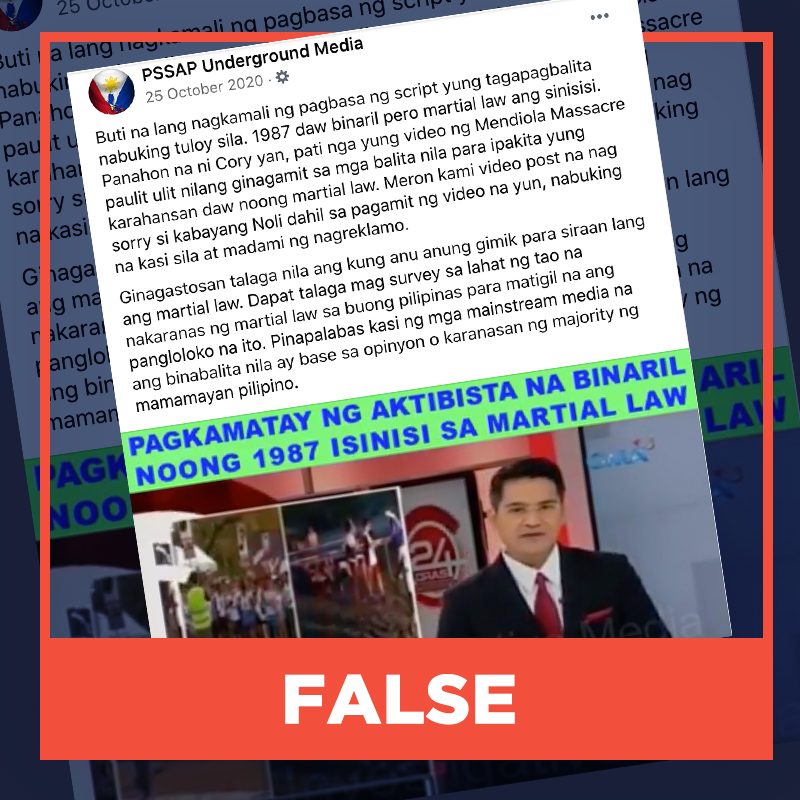 Facebook Twitter Copy URL
Copied
The news video did not attribute the student leader's death to Martial Law. It correctly reported that Alejandro was shot dead in 1987.

The video on “PSSAP Underground Media” was digitally altered to show that the reporter said Alejandro was gunned down in 1987. The video’s caption claimed this was a mistake on the reporter’s part, as the report intended to blame Alejandro’s death on Martial Law, which was formally lifted in 1981 by the late dictator Ferdinand Marcos, who still continued to carry martial law powers after.

While the video first became viral in October 2020, many social media users are still sharing it as of writing. The post currently has an estimate of 1,300 shares, 5,200 reactions, and 134,000 views.

The GMA news program “24 Oras” was factual and did not link Alejandro’s death to Martial Law.  (It was widely believed that soldiers disgruntled with the Cory Aquino regime were behind his killing.)

The fun run also commemorated Alejandro, a University of the Philippines student leader and activist during the Marcos years. Alejandro led the protests against tuition hike in the early 1980s. He was also a founding member and secretary-general of the Bagong Alyansang Makabayan (BAYAN), an alliance of left-wing Philippine organizations.

Alejandro’s activism continued after the Marcos administration. He was ambushed on September 19, 1987, after a press conference where he called for a street protest against military control under the Cory Aquino administration.

Rappler had previously fact-checked “PSSAP Underground Media” when they falsely shared about Marcos’ role in the introduction of tilapia to the country and the pork barrel as part of the Philippine Constitution. – Danah Cubacub/Rappler.com