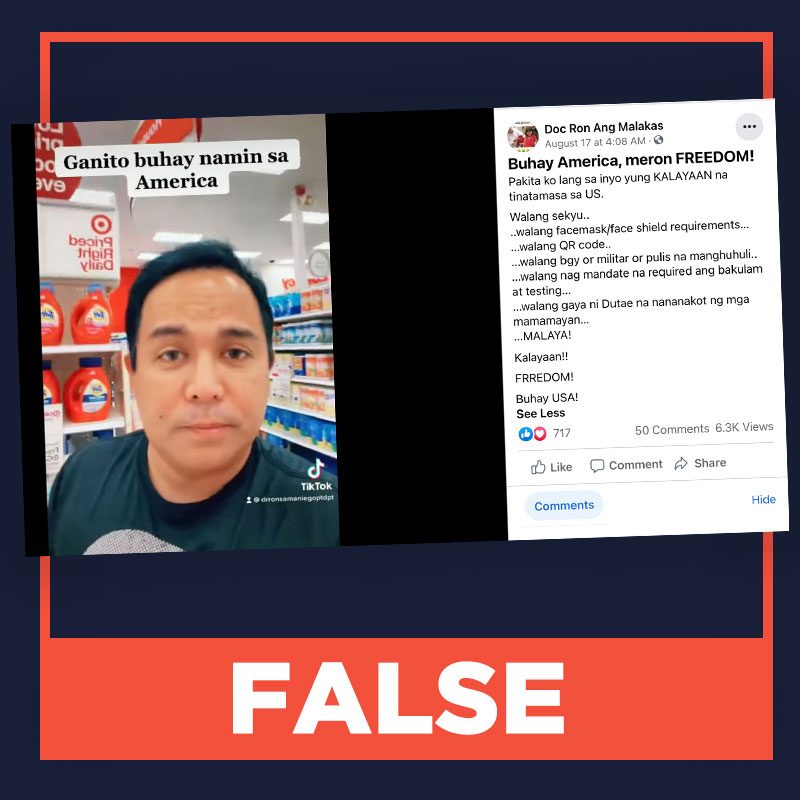 Facebook Twitter Copy URL
Copied
Some states and territories in the United States still have rules requiring face masks, in general or in specific settings

An August 17 post on the Facebook page “Doc Ron Ang Malakas” falsely states that there are no face mask requirements in the United States, among other things. As of writing, the post has over 6,300 views, 717 reactions, 50 comments, and 88 shares.

(Let me show you the freedom enjoyed in the US. No security guards, no face mask/shield requirements, no QR code [for contact tracing], no barangay, military, or police making arrests, no mandates requiring vaccines and testing, no one like Rodrigo Duterte who threatens people. Free! Freedom!)

The post by “Doc Ron Ang Malakas” also has an accompanying video of Ron Samaniego, a physical therapist who also goes by “Dr. Ron.”

There are still US states and territories that require the wearing of face masks, as a general mandate or in specific settings. Some states have reinstated mandates amid the threat of the more contagious Delta variant.

The article also provides links to the applicable regulations for each state or territory.

The American Association of Retired Persons, an organization advocating for Americans aged 50 and above, also has an article updated on August 16 titled “State-by-State Guide to Face Mask Requirements,” which has a summary and links to each US state’s regulations involving the wearing of face masks.

Both the Philippine Physical Therapy Association, Inc. and the Department of Health have previously released statements denouncing Samaniego’s dubious claims about COVID-19 and vaccines.

Rappler has also fact-checked Samaniego at least once before. (READ: FALSE: COVID-19 tally in PH manipulated by doctors) – Percival Bueser/Rappler.com

Percival Bueser is a graduate of Rappler’s fact-checking mentorship program, a five-week exclusive and hands-on training on detecting, investigating, and verifying online misinformation and disinformation.