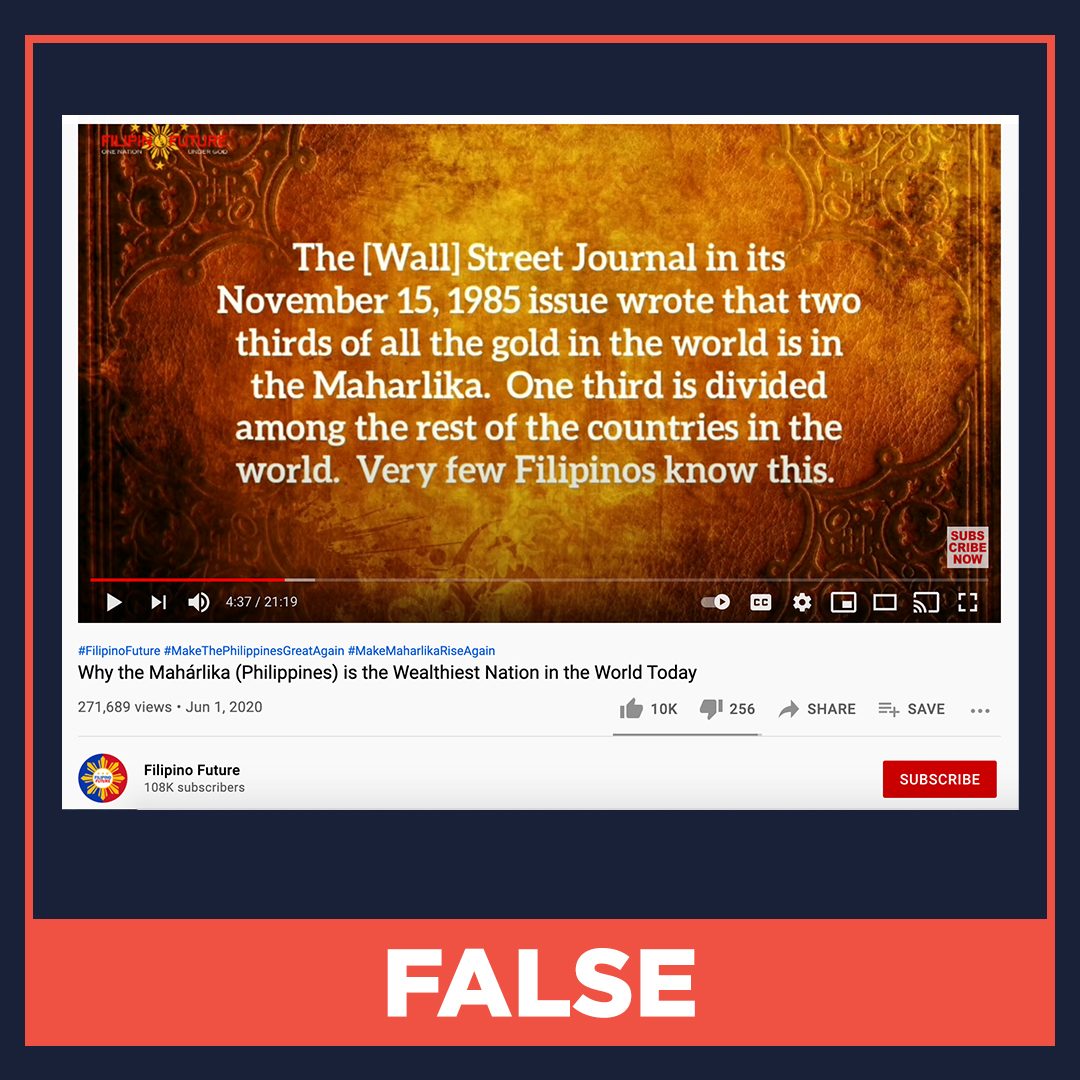 Facebook Twitter Copy URL
Copied
No reference to the claim that two-thirds of the world’s gold is in the Philippines can be found from the said issue, as confirmed by The Wall Street Journal

A YouTube video posted by the channel “Filipino Future” on June 1, 2020, claimed that a November 15, 1985, issue of The Wall Street Journal stated that two-thirds of the world’s gold was in the Philippines. This claim was made alongside other allegations about the so-called “Marcos gold.”

The video said: “The [Wall] Street Journal in its November 15, 1985 issue wrote that two-thirds of the world’s gold is in the Maharlika. One-third is divided among the rest of the countries in the world. Very few Filipinos know this.” The word “Maharlika” is used by “Filipino Future” to refer to the Philippines.

The Wall Street Journal confirmed to Rappler in an email that they found no reference to the claim that two-thirds of the world’s gold was in the Philippines in their November 15, 1985, issue.

A search using ProQuest didn’t yield such article either. ProQuest is an information-content and technology company that provides libraries and researchers with journals, newspapers, reports, and other resources. It can show the titles of all articles containing keywords from all issues of The Wall Street Journal from January 2, 1984 onwards.

A search using sets of keywords – like “gold philippines,” “gold maharlika,” “gold Philippines thirds” (in reference to the “two-thirds” measure cited in the claim) or similar – along with limiting the search to the source types “newspapers” and “historical newspapers” and the date range up to November 15, 1985, yields no suitable result from The Wall Street Journal.

The video from “Filipino Future” also mentioned the existence of amounts of gold that were more than one million metric tons, a claim that was fact-checked by Rappler before.

The video also mentioned names of purported historical figures in “Marcos gold” claims that Rappler fact-checked before, such as the Tallanos and Jose Antonio Diaz.