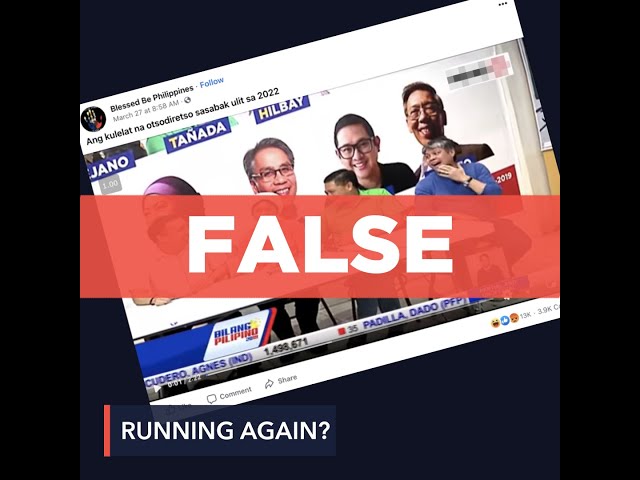 Facebook page “Blessed Be Philippines” uploaded a video on March 27 that falsely claimed Otso Diretso, the opposition’s slate formed in 2018 for the 2019 senatorial election, will run again in the 2022 elections.

This is false. There are no official announcements of candidacies from the Otso Diretso as a group, nor the members of the slate as of Thursday, April 22. The video uploaded by the page is also not new but was from a news report in 2019.

The Otso Diretso slate includes Romulo Macalintal, Gary Alejano, Erin Tañada, Florin Hilbay, Samira Gutoc, Mar Roxas, Bam Aquino, and Chel Diokno. To date, none of them have made any official announcements of their intent to run again for any position in the upcoming elections.

Moreover, the accompanying video uploaded by “Blessed Be Philippines” was from a News5 report back on May 14, 2019. The report talked about how the Otso Diretso candidates had accepted their defeat in the 2019 senatorial race.

The schedule for the filing of certificates of candidacy for all elective positions for the 2022 elections was set by the Commission on Elections from October 1 to October 8, 2021, including certificates of nomination and acceptance. (READ: Comelec releases calendar of activities for 2022 elections)

The post from “Blessed Be Philippines” had over 213,000 views, 13,100 reactions, 3,900 comments, and 326 shares as of writing. Claim Check, Facebook’s monitoring tool, flagged the post for containing potentially false information.

Rappler has debunked other posts from “Blessed Be Philippines” in the past. In 2019, it falsely claimed that nobody was poor during Martial Law and that “real poverty” happened during the Aquinos’ terms. It also shared in 2018 a false pie chart of the Philippines’ national debt under the last 3 administrations. – Pauline Macaraeg/Rappler.com