FALSE: Photos of religious statues discarded in India due to COVID-19 crisis 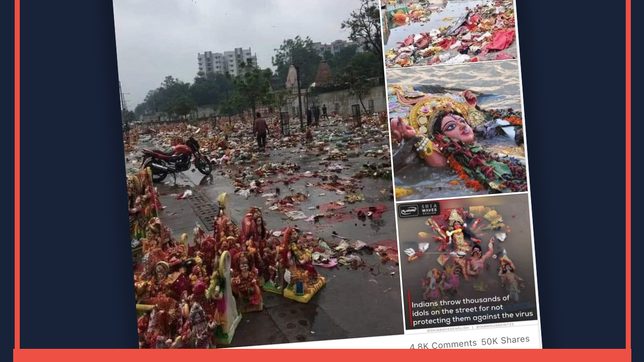 Facebook Twitter Copy URL
Copied
The photos were taken before the pandemic, during celebrations of Hindu festivals

Several Facebook pages posted a set of photos of religious statues in rivers, and falsely claimed that Indians were throwing away the figures for failing to protect them against COVID-19. The posts appeared on Thursday, May 20.

The posts then included a Bible passage in Filipino from the book of Exodus, chapter 20.

A reverse image search showed that the photos in the viral posts have been available online as early as August 2019 during celebrations of Hindu festivals – months before the first case of COVID-19 was reported in Wuhan, China.

In August 2019, Indian Administrative Service officer Vijay Nehra tweeted one of the photos in the viral posts, during the Dashama festival in the city of Ahmedabad. “Instead of immersing Dashama idols in the river, they have respectfully left them on the banks!!” Nehra said.

Immersion of religious statues or idols is part of Hindu rituals, typically done during the culmination of festivals.

Another photo was included in an October 2019 report by Indiatimes.com about the Durga Puja celebrations in New Delhi. This makes it impossible for the photo to be related to the ongoing COVID-19 crisis in India.

A reverse image search of the last photo in the viral posts led to a related fact check article from Snopes published on May 12, 2021. It concluded that the photo was miscaptioned. “Although we have not yet been able to pinpoint the exact origins of that particular photograph, it almost certainly shows the ritual of immersion at the culmination of a festival in honor of the goddess Durga,” Snopes said.

Claim Check, Facebook’s monitoring tool that identifies suspicious posts shared on the platform, flagged at least five posts that contained this claim. These posts have over 81,800 combined shares, 27,000 reactions, and 7,000 comments, as of writing.

India has reported 25.77 million confirmed cases as of Thursday, May 20, making it the country with the second highest numbers after the United States. Its death toll stood at 287,122. – Pauline Macaraeg/Rappler.com