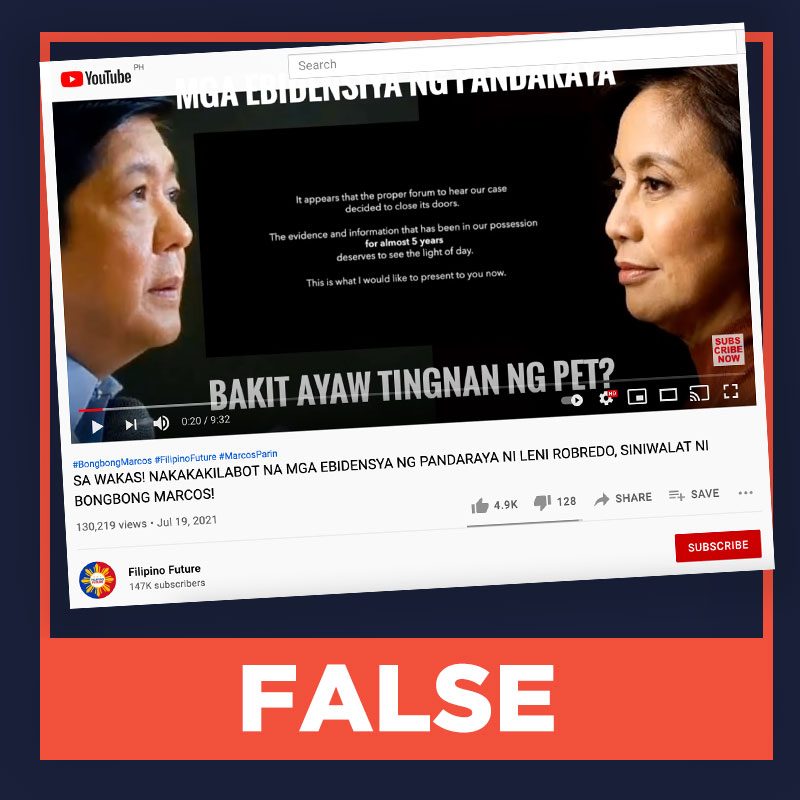 A July 3 post on the Facebook group “Bongbong Marcos for President 2022” showed a photo with supposed presidential preference survey results for the May 2022 elections. The results were claimed to be from Pulse Asia, Social Weather Stations (SWS), Parish Pastoral Council for Responsible Voting (PPCRV), and Kapisanan ng mga Brodkaster ng Pilipinas (KBP).

As of writing, the post had 544 reactions, 696 comments, and 53 shares. Versions of the post with different results are also circulating.

The claimed results are false.

Through an email to Rappler, Pulse Asia president Ronald Holmes said that they have not done the survey featured in the Facebook post.

As of the time the Facebook post was made, the latest survey that Pulse Asia conducted regarding presidential preferences was the February 2021 Nationwide Survey on the May 2022 Elections, whose results were released on April 24. The results for presidential prospects are shown on Table 1.

Respondents were asked whom they would vote for as president if the May 2022 elections were held right away with the given candidates on the list. Davao City Mayor Sara Duterte led for the entire Philippines with a national voter preference of 27%.

It can also be seen that the totals in each column in the Pulse Asia survey sum to nearly 100% (the difference with 100% is just a rounding error).

Also, through an email, SWS Director for Communication and Information Technology Leo Laroza enjoined the public to “rely on the SWS website for its official reports and survey figures.”

The survey results on the Facebook post also cannot be found in any release by the PPCRV, a Catholic Church-affiliated organization that describes itself as “a non-partisan, non-profit organization in the Philippines that works and strives for better elections,” or the KBP, a non-profit and non-governmental organization of Philippine broadcasters.

PPCRV, through an email, denied that they had any part in conducting the survey with the results shown in the Facebook post, and remarked too that the results don’t even add up to 100%.

Rappler has written fact checks about May 2022 presidential preference surveys, such as the following: