A video posted on Tuesday, July 6, by YouTube channel “Showbiz Fanaticz” falsely claims that Queen Elizabeth II is impressed by President Rodrigo Duterte’s good governance and that she supports the Duterte administration, based on her message sent to Duterte for the 75th anniversary of the United Kingdom and the Philippines’ diplomatic relations.

(Queen Elizabeth II herself said that she supported the good governance of President Duterte, especially his administration’s continued progress and the different projects in the Philippines.)

The video also shows a clip of a man named Malcolm Conlan, who says that he feels great happiness to see the Queen’s message for Duterte.

The video’s thumbnail shows a photo of Queen Elizabeth’s message posted by the British embassy in Manila.

Data from social media monitoring tool CrowdTangle show that the video has over 221,000 views and 500 comments on YouTube, as of writing.

Queen Elizabeth II’s message to Duterte for the celebration of the UK and the Philippines’ 75th anniversary of diplomatic relations did not mention Duterte’s supposed good governance at all.

Instead, the Queen gave her best wishes to the Filipino people and thanked Filipino nurses in the UK’s National Health Service (NHS) for bringing “exceptional care and comfort for their patients.” She also thanked Filipino frontliners in the UK for their response during the COVID-19 pandemic.

Filipino nurses are a crucial part of the UK’s healthcare system. Helen Whyley, the director of the Royal College of Nursing in Wales, said in an interview with BBC in April that Filipino nurses helped the NHS address the shortage of nurses in the UK.

In 2020, Filipino nurse May Parsons made history when she administered the world’s first approved COVID-19 vaccine to 90-year-old Margaret Keenan at a local hospital in Coventry. 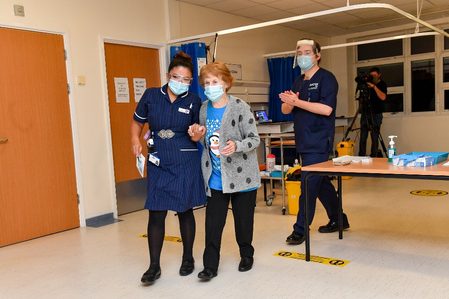 Aside from Queen Elizabeth II, Prince Charles also paid tribute to Filipino nurses in the UK in June.

Conlan, the UK citizen shown in the false video, is a London-based blogger and is not affiliated with the British embassy in the Philippines. Conlan’s video that was originally uploaded on his Facebook page only says that the Queen’s message to Duterte is historic and that he appreciates the Queen’s recognition of Filipino nurses in the UK. He did not claim that the Queen is impressed by Duterte’s good governance.

Rappler debunked a similar claim involving Queen Elizabeth II in 2020, wherein a photo of her was edited with a fake quote that praised Duterte.

Rappler has also debunked other claims that involve the Queen, such as a claim in 2018 that falsely quoted her as saying that then-president Donald Trump should follow Duterte’s footsteps, and a fake letter that was supposedly signed by the Queen. – Lorenz Dantes Pasion/Rappler.com