MISSING CONTEXT: Robredo says she was already helping in Marawi in 2016 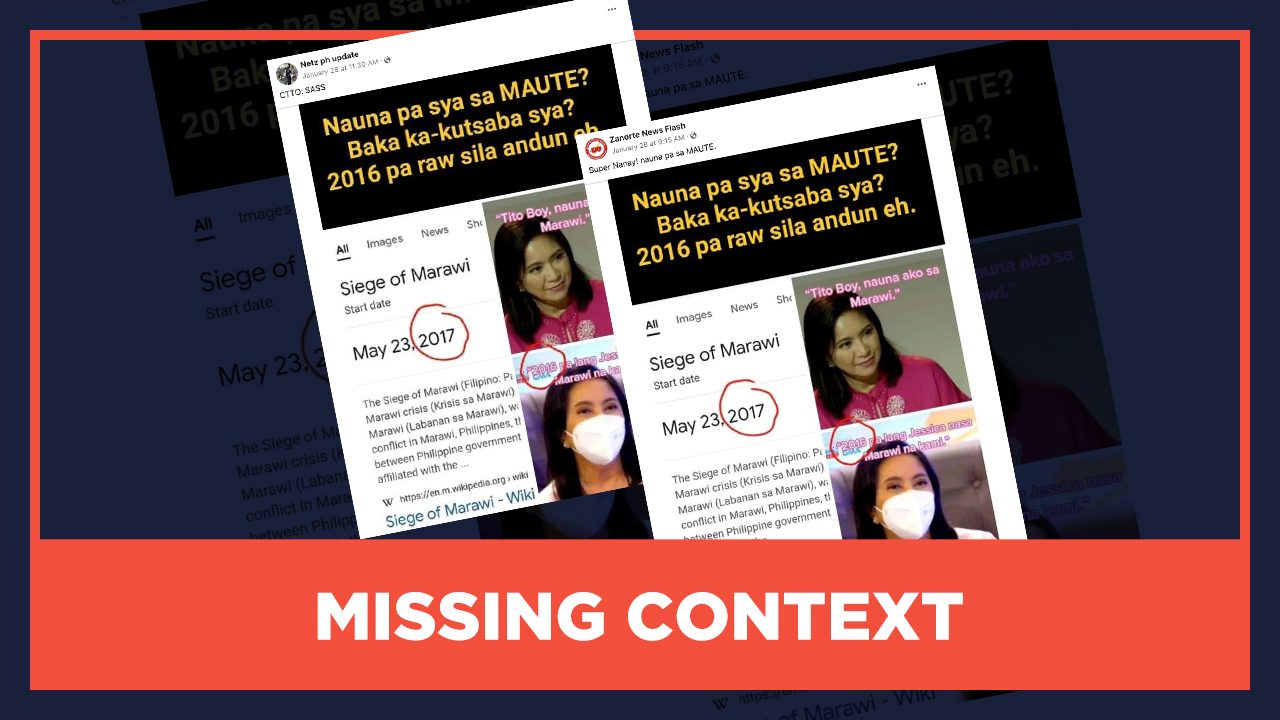 Facebook Twitter Copy URL
Copied
The Marawi Siege started on May 23, 2017, but even prior to the terror caused by the ISIS-inspired Maute group, Robredo had launched her office’s Angat Buhay program in the area

A post by Facebook Page “Netz ph update,” now with 43,987 followers, ridiculed Vice President Leni Robredo for claiming that she had already been assisting the residents of Marawi City since 2016, even before the terror attack by the ISIS-inspired Maute Group happened.

It paraphrased Robredo’s remarks on the recently-held presidential interviews by Jessica Soho and Boy Abunda. The quotes on the post say, “Tito Boy, nauna ako sa Marawi (I was the first to come to Marawi),” and “2016 pa lang Jessica nasa Marawi na kami (We were already in Marawi in 2016, Jessica).”

The photo also had the text: “Nauna pa siya sa MAUTE? Baka ka-kutsaba siya? 2016 pa raw sila andun eh (If she preceded even the Maute, maybe she was conspiring with them? She says she was already there in 2016).”

The post, showing a screenshot from Google, implied that it was not possible for Robredo to be helping terror victims since the Marawi Siege happened on May 23, 2017.

Meanwhile, Zanorte News Flash also posted the same claim on its Facebook page on January 28, saying: “Super Nanay! Nauna pa sa MAUTE (Super mother even came before the Maute).” The post had 240 comments and had been shared 261 times, as of 11:13 am of January 29.

While the siege indeed happened on May 23, 2017, what the posts failed to mention was that before the conflict, Marawi was one of the first beneficiaries of the Angat Buhay program since its launching in 2016. One of the first Angat Buhay villages was built in Marawi City.

In Jessica Soho’s interview, the host asked the four presidentiables what they could promise to the residents of Marawi City, who were still reeling from the destruction, if elected as president.

Robredo said her office had had its presence in Marawi since 2016, adding that the city was one of the adopted communities of the Angat Buhay Program of the Office of the Vice President. She said the first Angat Buhay village was constructed in Marawi, and went on to explain what her office had done after the siege happened.

The Angat Buhay Program, according to the website of the Office of the Vice President, is Robredo’s flagship program since assuming her role as vice president. – Ahikam Pasion, Antonio Manaytay/Rappler.com

Ahikam Pasion and Antonio Manaytay are awardees of the Aries Rufo Fellowship. This fact check was reviewed by a member of Rappler’s research team and a senior editor.