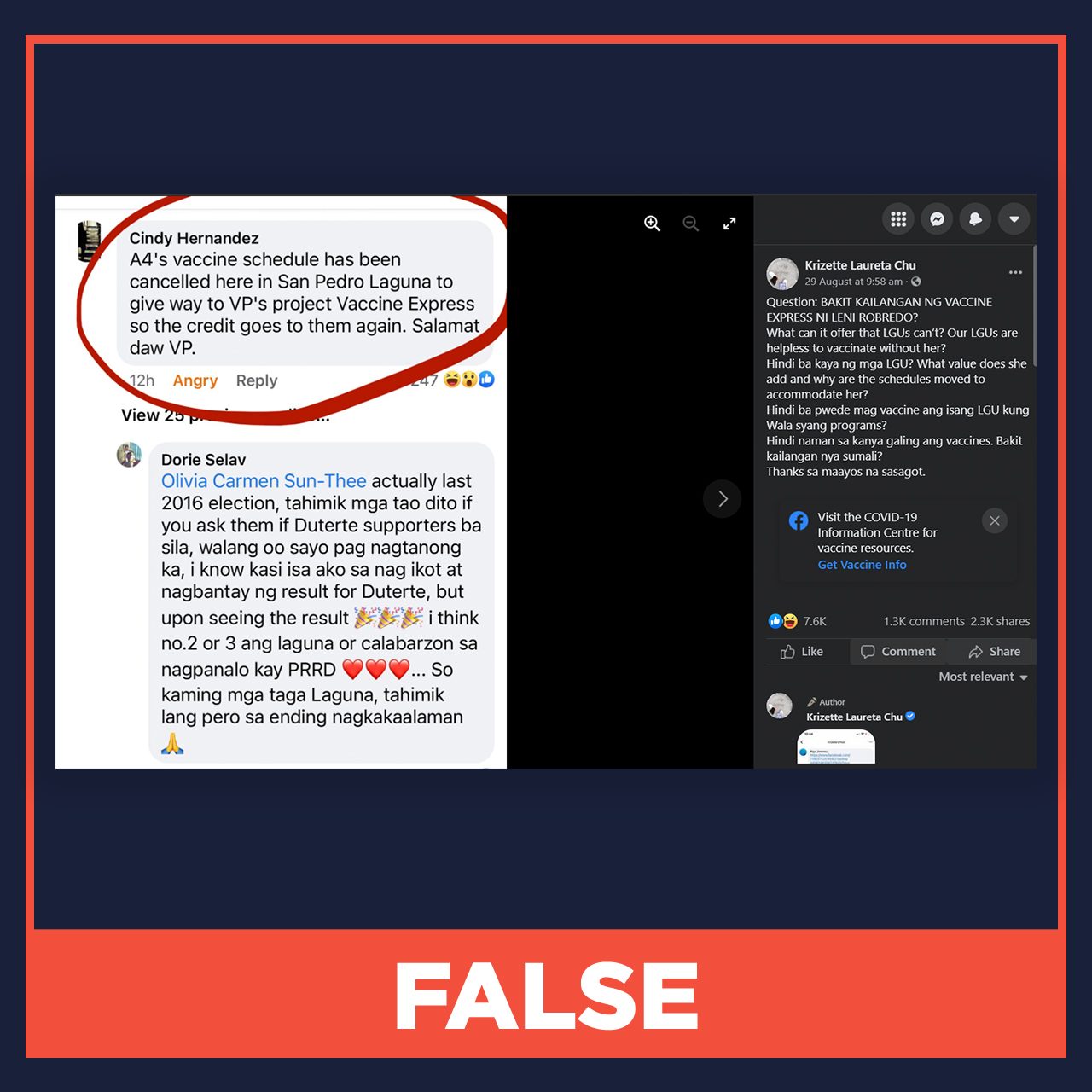 Facebook Twitter Copy URL
Copied
The local government of San Pedro, Laguna, has stated that vaccine supply allocated for Category A4 individuals are out of stock. Vaccinations for individuals in other categories are still carried out.

Facebook user Krizette Laureta Chu posted a photo containing a comment stating that the vaccination schedules of Category A4 citizens in San Pedro, Laguna, had been canceled to give way to Vice President Leni Robredo’s Vaccine Express project.

The comment, posted by another Facebook user, Cindy Hernandez, stated that “A4’s vaccine schedule has been canceled here in San Pedro Laguna to give way to VP’s project Vaccine Express so the credit goes to them again. Salamat daw (thank you, apparently) VP.”

San Pedro City CVIS, the COVID-19 Vaccine Information Service page of the city’s LGU, stated that they had run out of vaccine supply for Category A4 individuals, as of August 28. However, vaccination schedules for other categories would push through.

The Vaccine Express program of the Office of the Vice President (OVP), held on the same day, was open only to categories A2, A3, and A5 individuals.

Bernadeth Olivares, city councilor of San Pedro, has also since released a statement, indicating that no vaccination appointments were canceled to give way for OVPs program. As of writing, vaccinations for Category A4 individuals in the LGU are still suspended until further notice.

Vaccine Express is a program launched by the OVP to provide manpower to support partner LGUs in their vaccine administration efforts. This is the latest program initiated by the office to help hasten vaccination rollout in the country. Robredo’s team assisted the San Pedro City LGU by providing an additional vaccination site on August 28-29, 2021.

Chu has previously been fact-checked by Rappler for publishing false information. She has also been repeatedly fact-checked by Vera Files, which is part of the International Fact-Checking Network at Poynter. – Dylan Salcedo/Rappler.com