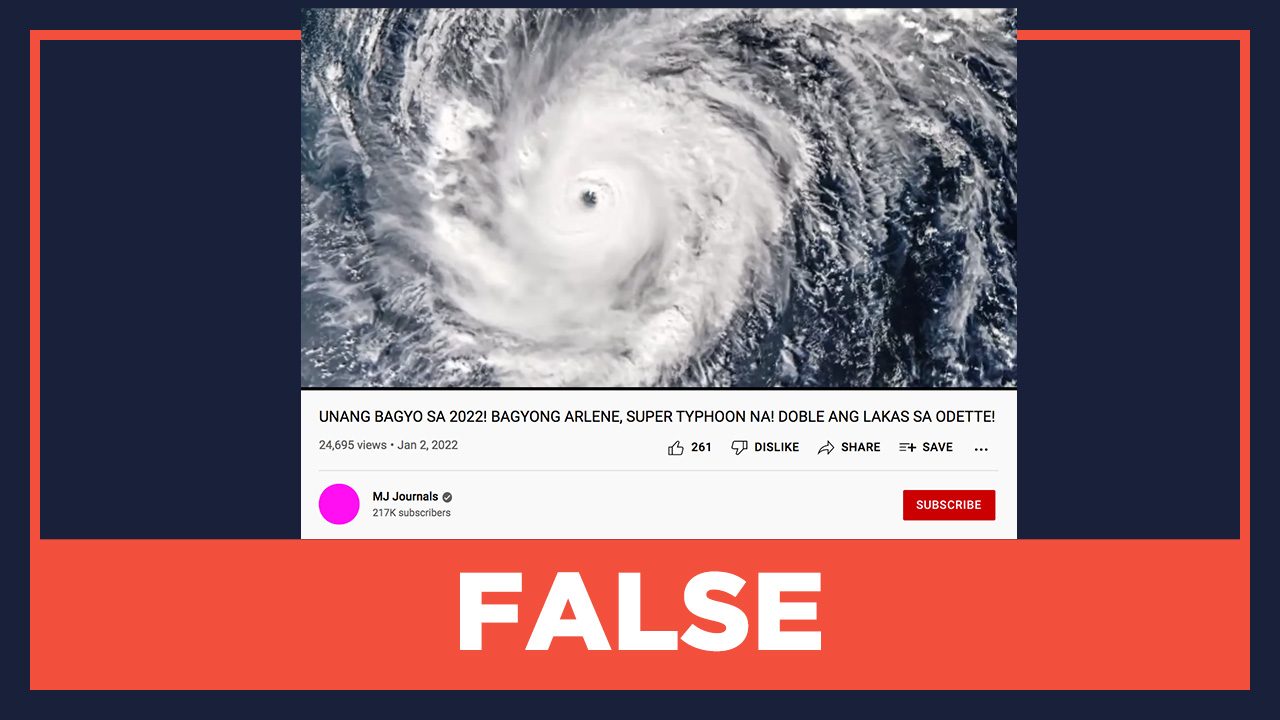 Facebook Twitter Copy URL
Copied
PAGASA’s weather forecast makes no mention of an oncoming typhoon. The agency’s regular set of names for tropical cyclones does not include 'Arlene.'

YouTube channel “MJ Journals” uploaded two videos, claiming that the first typhoon to hit the Philippines in 2022, dubbed “Arlene,” will be twice as strong as Typhoon Odette, which devastated parts of all the island groups in the country.

They were uploaded on January 2 and January 6.

The audio used in the January 2 video was lifted from the Public Weather Forecast for 4 am, January 2, 2022, uploaded by the Philippine Atmospheric, Geophysical, and Astronomical Services Administration (PAGASA).

Meanwhile, the audio used in the January 6 video was lifted from PAGASA’s Public Weather Forecast for 4 am, January 6, 2022.

Neither forecast made any mention of an oncoming typhoon. As of January 10, there is no active tropical cyclone outside the Philippine Area of Responsibility (PAR).

On January 2, The Philippine Star reported that the first week of 2022 would be typhoon-free, according to PAGASA. In its weekly weather outlook for January 7 to 14, PAGASA said “no tropical cyclone development is expected.”

The regular set of names for tropical cyclones within the PAR, as listed in the PAGASA website, shows “Agaton” as the first name for a typhoon in 2022. Moreover, “Arlene” is not included in any regular set nor in any auxiliary set of tropical cyclone names listed by PAGASA.

Typhoon Odette hit the Philippines in December 2021, killing over 400 people. (READ: IN NUMBERS: The aftermath of Typhoon Odette)