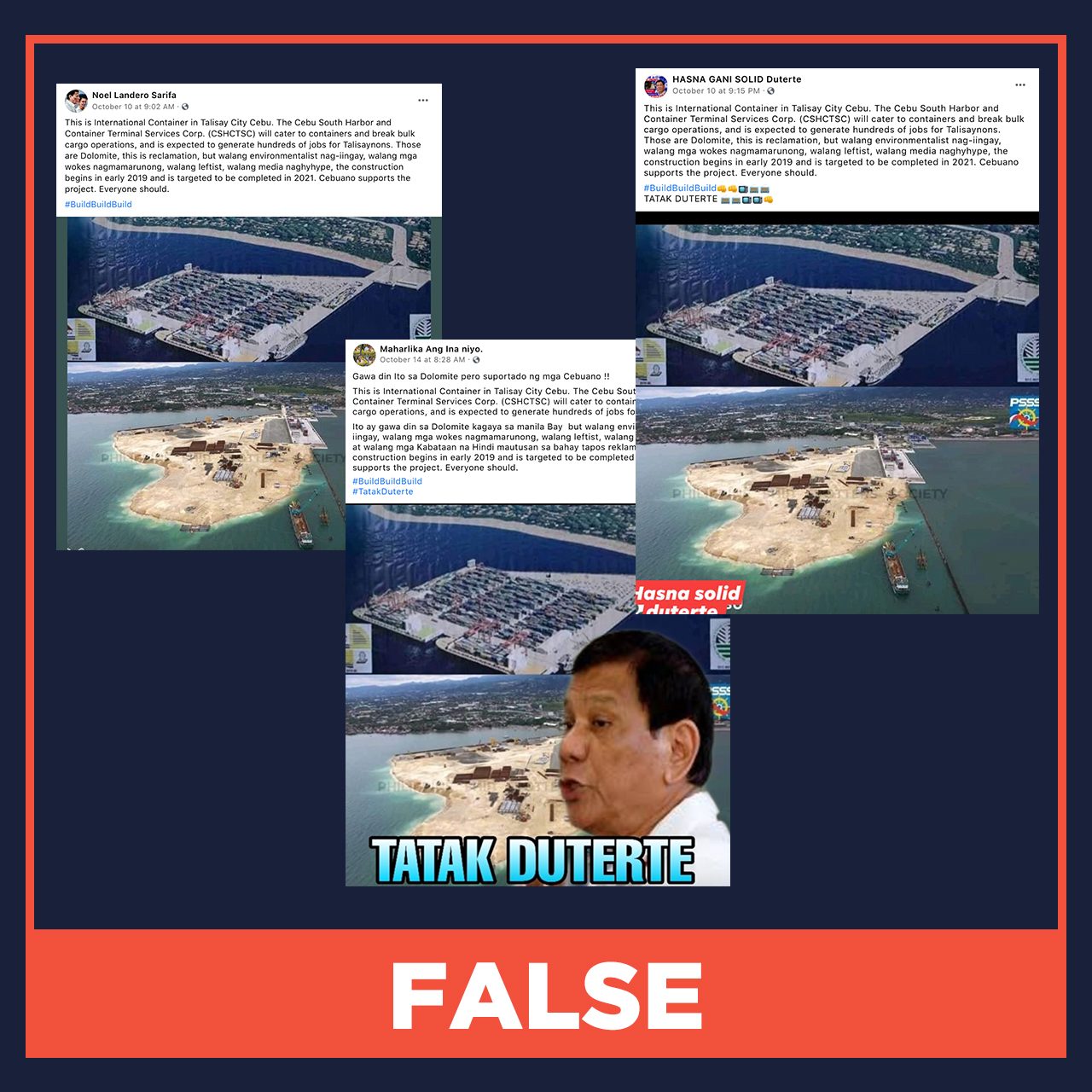 Two of the posts, specifically from Noel Landero Sarifa and HASNA GANI SOLID Duterte, said, “This is International Container in Talisay City Cebu… Those are Dolomite, this is reclamation, but walang environmentalist nag-iingay, walang mga wokes nagmamarunong, walang leftist, walang media naghyhype, the construction begins in early 2019 and is targeted to be completed in 2021.”

(Those are dolomite, this is reclamation, but no environmentalists are calling it out, no wokes are being know-it-alls, there are no leftists, no media hyping it up, the construction begins in early 2019 and is targeted to be completed in 2021.)

However, the international port construction site does not contain dolomite, but a type of limestone called anapog.

In a Viber message to Rappler, Cebu Port Authority General Manager Leonilo Miole refuted this claim. “Per verification by our engineering department, the filling materials used by the Talisay international container port do not contain dolomite but rather that of a lower class type of limestone called anapog,” Miole told Rappler.

“Anapog” is a local term for weathered limestone, which is abundant in the Visayan region. On the other hand, according to Britannica, most dolomites are believed to originate from the recrystallization of limestones.

Miole added that the anapog was sourced from the local government units of Talisay, Naga, and Minglanilla in Cebu. He also said the project is expected to be completed in 2022.

A sentence in the posts’ caption was lifted from a SunStar article on the international port. The sentence reads: “The Cebu South Harbor and Container Terminal Services Corp. (CSHCTSC) will cater to containers and break bulk cargo operations, and is expected to generate hundreds of jobs for Talisaynons.”

The article made no mention of whether or not the reclamation area is composed of dolomite sand. Rappler was also unable to find any reports from other news organizations or government offices that prove the construction site contained dolomite.

Earlier, as part of the national government’s rehabilitation project, Manila Bay was overlaid with artificial white sand made from dolomite.

However, many Filipino citizens criticized this move, saying it was a waste of resources and that it could harm the bay’s ecosystem. Lawmakers also voiced concerns about how the crushed dolomite could possibly pose public health risks.

Dolomite and limestone pose similar health hazards. According to the US Centers for Disease Control and Protection, limestone can cause skin and eye irritation, like dolomite. – with reports from Margarita Gonzalez, Loreben Tuquero/Rappler.com