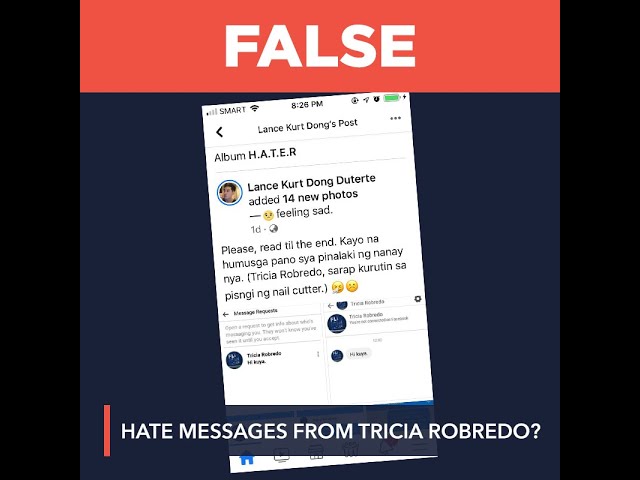 Facebook user “Lance Kurt Dong Duterte” posted screenshots of a supposed online chat between him and Tricia Robredo, the second daughter of Vice President Leni Robredo. The user claimed he is the grandson of President Rodrigo Duterte. In the screenshots, Tricia supposedly cursed at him and insulted the President.

This claim is false. The messages in the screenshots did not come from Tricia, whose account is verified by Facebook.

Verified accounts have a blue checkmark next to the names of a profile or page. The blue checkmark indicates that Facebook confirmed that it is the authentic page or profile for a public figure, media company, or brand.

In the screenshots that circulated, the name Tricia Robredo did not have the blue checkmark next to it. This suggests that the screenshots were fabricated, or the account where the messages came from was only posing as the Vice President’s daughter.

Tricia also denied that she was involved in the supposed exchange with Lance Kurt Dong. In a post on Friday, November 27, Tricia said she doesn’t talk like the way as shown in the screenshots, and that she is “rarely on [Facebook] Messenger.”

The Vice President also denied the claim on her personal account on Friday and urged people to report the fake accounts. “Again, this is now the culture being promoted in our midst – a culture of hate and lies. Let us not succumb to this. Hindi ganito tayong mga Filipino (Filipinos are not like this). We are so much better than this,” she said.

As of writing, the account Lance Kurt Dong Duterte is no longer available on Facebook. The screenshots, however, were still being shared online. Other websites and YouTube accounts also used the screenshots in their own content.

A reader emailed the screenshots to Rappler for verification. – Pauline Macaraeg/Rappler.com