TRUMP. U.S. President Donald Trump speaks on election night in the East Room of the White House in the early morning hours of November 04, 2020 in Washington, DC.

Facebook Twitter Copy URL
Copied
As of Wednesday, November 4 (Philippine time), neither Trump nor Biden has acquired the 270 electoral votes needed for a victory. The winner for multiple key swing states has also not been called as of Trump's speech. 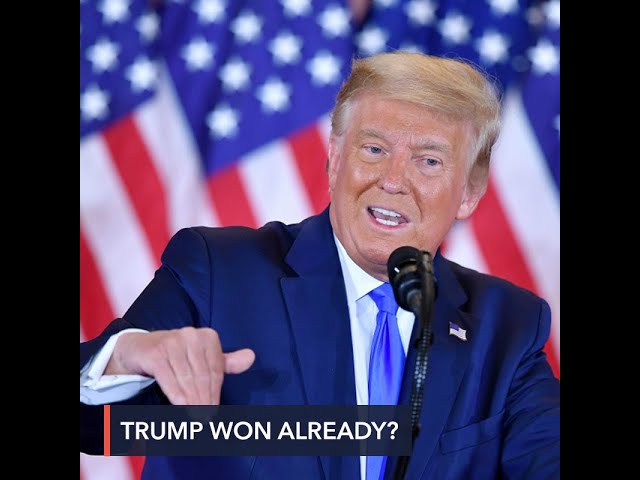 US President Donald Trump claimed that he had already won the US election in 2020.

In a speech on Wednesday, November 4 (Philippine time), at the East Room of the White House, Trump enumerated raw vote counts in multiple states and said, “We lead by 76,000 votes with almost nothing left, and all of a sudden everything just stopped. This is a fraud on the American public. This is an embarrassment to our country. We were getting ready to win this election. Frankly, we did win this election.”

He added: “We want the law to be used in a proper manner so we’ll be going to the US Supreme Court. We want all voting to stop. We don’t want them to find any ballots at 4 o’clock in the morning and add them to the list, okay? It’s a very sad moment. To me this is a very sad moment, and we will win this, and as far as I’m concerned, we already have won it.”

This claim is false. At the time of Trump’s speech, neither he nor his Democrat rival Joe Biden had acquired the 270 electoral votes required to win the presidency. Votes, including mail ballots, are also still being counted in key states that have not yet been called.

The President also prematurely asserted that he has either won or is winning by a large margin in the states of Georgia, North Carolina, Pennsylvania, and Michigan.

Cutting away from Trump’s speech, NBC News reported the latest counts as of that time. For Pennsylvania, only 73% of the votes were in, and an estimated 1,919,121 votes have not been counted at the time in comparison to Trump’s lead of 695,981 votes.

This claim was also fact-checked by PolitiFact, which said that “absentee and mail-in ballots from urban areas likely to support Biden” are among those that remain uncounted in these 4 states as well as in Wisconsin, all of which Trump carried in 2016.

Counting mail-in ballots will also take longer, thus making it harder to call a winner by election night. According to a Pew Research Center article, “[In] 22 states (plus D.C.), mail ballots postmarked by Election Day (or in a few cases the day before) can still be counted even if they arrive days later – further lengthening the counting process. Bottom line: Any vote totals reported on election night will be even more unofficial than they typically are.”

On the same day, social media platforms tagged with a disclaimer or labeled as potentially misleading Trump’s post on an unfounded claim of efforts to “steal” the election. – Loreben Tuquero/Rappler.com