Facebook Twitter Copy URL
Copied
Nurse Tiffany Dover is alive. She fainted after receiving the vaccine due to an underlying health condition. 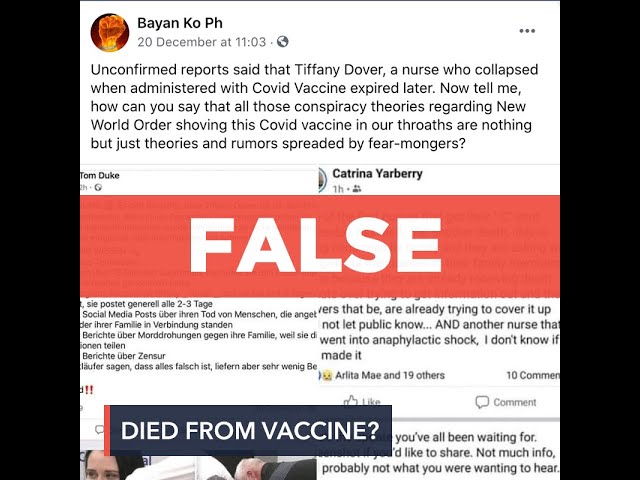 Posts containing this claim were flagged by Facebook as potentially misleading. One such post on the page “Bayan Ko Ph” has 187 reactions, 48 comments, and 121 shares as of posting. The page itself has more than 60,000 followers. A video of Dover fainting was also emailed to Rappler for verification.

This claim is false. Dover is alive and she fainted after receiving the vaccine because she has an underlying health condition.

Dover was administered the vaccine on Thursday, December 17, along with 5 other healthcare workers at CHI Memorial.

On December 20, the hospital tweeted that Dover appreciated the concern shown for her and that she is doing well. She also asked for privacy for her and her family.

On December 22, the hospital also tweeted a video of Dover with her colleagues.

Fact checkers like the Associated Press (AP) and Reuters have also spoken to hospital representatives who confirmed that Dover recovered after she fainted and is alive.

According to AP, CHI’s vice president of marketing communications Lisa McCluskey, said that Dover was alive and working a shift at the hospital on December 21. A spokesperson for the hospital also confirmed to Reuters in an article published on December 19 that Dover “quickly recovered” after she fainted.

There are no reports from legitimate news organizations that say Dover has died.

When asked to explain her fainting during an interview with WRCB Chattanooga, a local news channel, Dover said, “I have a history of having an overactive vagal response, and so with that, if I have pain from anything, hangnail or if I stub my toe, I can just pass out.”

A vagal response, also known as a vasovagal reflex, is a reflex that stimulates the vagus nerve, which sends a message to the brain that may cause a sudden drop in blood pressure and heart rate. Vasovagal syncope occurs when the body overreacts to certain triggers, causing one to faint.

According to the US Centers for Disease Control and Prevention, fainting, or syncope, commonly happens after vaccination. Scientists think that the fainting is due to the vaccination process, not the vaccines themselves. The CDC says that there is no definite answer to the question of whether an ingredient in vaccines is responsible for fainting.

Rappler has fact checked “Bayan Ko Ph” before. Read more about the claims by this page that we’ve debunked by clicking on the links below.