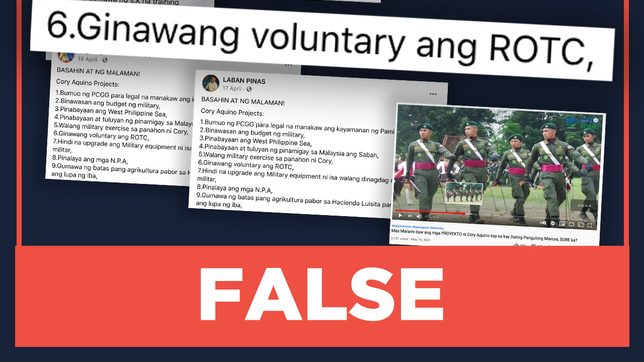 Facebook Twitter Copy URL
Copied
The Reserve Officers’ Training Corps was made voluntary under Republic Act 9163, which was signed in 2002 during the presidency of Gloria Macapagal-Arroyo

A YouTube video posted by the channel “KAPATID AVINIDZ” on Saturday, May 15, claimed that one of the projects of former president Corazon “Cory” Aquino during her term was to make the Reserve Officers’ Training Corps (ROTC) voluntary.

The claim was one of several claims about supposed projects during Aquino’s term discussed in the video, which has 8,577 views, as of writing.

The claim about the voluntary ROTC, along with other claims about projects said to be implemented under Aquino’s administration, can also be found in posts on the Facebook pages “LABAN PINAS” and “Eagle eyes of the Philippines citizen-report,” in the Facebook account of Lovell Paras Canceran, and even in a comment dated April 26, 2016, on a photo in the Facebook page of The Economist.

The law that made ROTC voluntary is Republic Act 9163, the “National Service Training Program (NSTP) Act of 2001.” The law was signed on January 23, 2002, during president Gloria Macapagal-Arroyo’s term, not Aquino’s.

Under Section 4, ROTC became one of NSTP’s three components, with the other two being the Literacy Training Service and the Civic Welfare Training Service. ROTC was also made “optional and voluntary.”

There was indeed a law pertaining to ROTC which was passed during the term of Cory Aquino. It was Republic Act 7077, the “Citizen Armed Forces of the Philippines Reservist Act,” signed on June 27, 1991. It, however, never made ROTC voluntary. Section 38 discusses mandatory military training for students enrolled in colleges, universities, and similar institutions; Section 39 states that basic ROTC is mandatory in the first two years.

RA 7077 was mentioned in Section 16 of RA 9163 as one of the laws that was amended and modified for having provisions inconsistent with the new law.

Calls to make ROTC voluntary before were triggered in 2001 by the death of Mark Welson Chua, who was an ROTC cadet from the University of Santo Tomas (UST). He was killed by ROTC senior officers following his revelations of alleged corruption within the ROTC program in the UST at that time. President Rodrigo Duterte, however, has called for ROTC to be made mandatory again.

Rappler has fact-checked the YouTube channel “”KAPATID AVINIDZ,” the Facebook pages “LABAN PINAS” and “Eagle eyes of the Philippines citizen-report,” and the Facebook account of Lovell Paras Canceran at least once each before. – Percival Bueser/Rappler.com