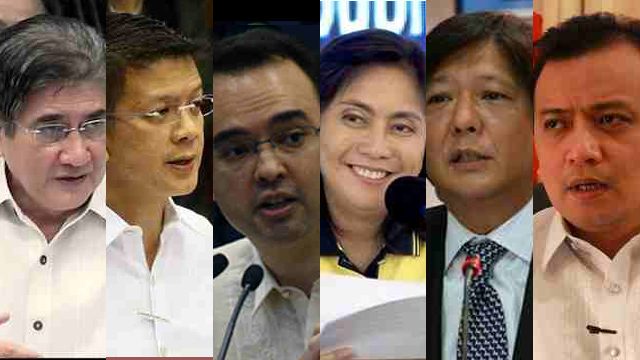 MANILA, Philippines – Are the 6 candidates for vice president as truthful as their presidential candidates when it comes to academic achievements?

We checked on these claims, excluding diploma courses, fellowship programs, and honoris causa degrees that the candidates have finished and/or received. Here’s what we found.

A certification from the UP Office of the University Registrar shows that Escudero “studied from June 1985 to October 1988 and from November 1987 to April 1993. He graduated with the degrees of Bachelor of Arts (Political Science) and Bachelor of Laws on Oct 23, 1988 and Apr 24, 1993, respectively.”

*Another interesting note: On his Senate profile, Honasan says he “took up Economics at the University of the Philippines. He then went on to the Philippine Military Academy.”

Honasan then “shifted to Bachelor of Arts (Economics) during the Second Semester 1966-67. He earned a total of 15 academic units.”

The degrees listed above are not the original ones posted on his Senate profile. His profile initially said Marcos had a bachelor of arts degree in philosophy, politics, and economics from Oxford University. He then claimed to have earned a master in business administration (MBA) degree from Wharton.

Rappler’s fact-checking in February 2015 revealed that his name did not appear on the class list – or the roll of students who successfully completed their degrees – at Oxford in 1978. Meanwhile, his Wharton MBA degree was unfinished, as attested to by a University of Pennsylvania professor. His name likewise didn’t appear in UPenn’s alumni database. (READ: EXCLUSIVE: Did Bongbong Marcos lie about Oxford, Wharton?)

Shortly after the publication of Rappler’s story, Marcos corrected his résumé on the Senate website.

Her official website says that after graduating from the UP School of Economics, she “took up her degree in Law from the University of Nueva Caceres in 1990.”

In addition, Trillanes wrote on his Senate résumé that he took up his BS Bachelor of Science in Electronics and Communications Engineering (ECE) at De La Salle University (DLSU) until his 4th year in 1991, when he entered the Philippine Military Academy.

The verification of this information is still ongoing, though, as Trillanes’ camp has yet to provide Rappler with an authorization letter required by DLSU. – Rappler.com