Will voting trends in ARMM hold in 2016? 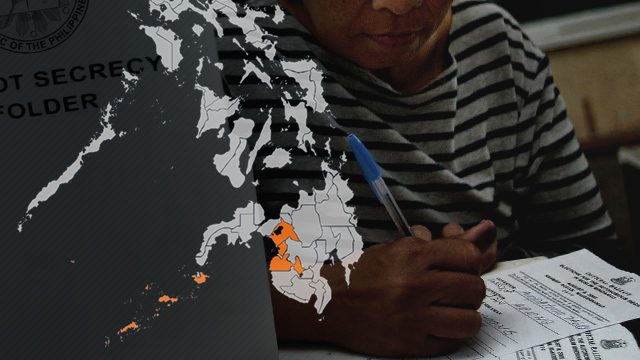 Facebook Twitter Copy URL
Copied
From 2004 to 2013, candidates from coalitions supporting the administration won in the Autonomous Region in Muslim Mindanao. Will this trend continue in the May 2016 polls despite a different Mindanao favorite?

MANILA, Philippines – The Autonomous Region in Muslim Mindanao (ARMM) has a notorious history of election-related cheating and violence. Several of its provinces are consistently identified as election hot spots by authorities.

Rappler takes a closer look at public election data, which shows disturbing patterns that may hint preparations for cheating could be happening again. We focused on 3 factors: a whopping increase in registered voters for 2016; a history of large voter turnouts; and winners from the ruling party.

In part 1, Rappler’s Rey Santos pointed out that latest figures from the Commission on Elections (Comelec) show a two-digit percentage increase in ARMM’s voter population – the only place where this happened in the Philippines.

Aside from the 5 ARMM provinces topping the list of voter population increases, even voter turnout rates have been incredible. Except in 2010 when it registered only a 70.47% turnout, the region almost always has had the highest number of people who actually voted.

In 2015, the poorest region in the country became a household name because of the deadly Mamasapano clash and the controversial Bangsamoro Basic Law (BBL). The spotlight will once again be on ARMM as it aims for clean elections this coming May.

In the past two presidential elections, the presidential-vice presidential tandem who garnered the most votes in ARMM have moved on to take the highest positions in the Philippines.

Despite winning in ARMM against Fernando Poe Jr by 256,322 votes, Gloria Macapagal Arroyo’s successful reelection bid in 2004 was marred by allegations of cheating.

The 5 provinces in the region – Basilan, Lanao del Sur, Maguindanao, Sulu, and Tawi-Tawi – were mentioned in her conversations with Comelec Commissioner Virgilio Garcillano, also referred to as the “Hello Garci” scandal.

For his part, Benigno Aquino III was elected president when he ran under the Liberal Party in 2010. In ARMM, he placed number one with 343,164 votes – 93,414 votes more than Manuel Villar.

Aquino’s running mate Mar Roxas did not win in ARMM. Makati Mayor Jejomar Binay of Partido ng Demokratikong Pilipino-Lakas ng Bayan got the most votes in the region and was elected vice president in 2010.

Throughout their administrations, they were connected with certain coalitions and parties that eventually painted the political picture in ARMM.

Based on 2004-2013 election results from the Comelec, voters in these provinces chose senatorial candidates who ran under party tickets affiliated with the incumbent president or the administration. In 2004, 75% of the top 12 senatorial candidates who had the most votes in ARMM were from Koalisyon ng Katapatan at Karanasan sa Kinabukasan (K4), a multi-party alliance which supported the reelection of Arroyo.

K4 eventually took 7 seats in the Senate, while the opposition, Koalisyon ng Nagkakaisang Pilipino (KNP) had 5.

In 2007, senatorial candidates from the Arroyo administration coalition also had the upper hand in ARMM. Ten out of the 12 slots went to TEAM (Together Everyone Achieves More) Unity, leaving two for the Genuine Opposition (GO).

However, only two administration bets won a Senate seat that year: Joker Arroyo and Edgardo Angara.

In 2013, despite a different president, bets under the Aquino administration slate still emerged victorious in ARMM. The winning 12 in the region included 9 members of Team PNoy and 3 from the United Nationalist Alliance (UNA) ticket.

All 9 Team PNoy candidates were proclaimed as senators eventually.

Meanwhile, in 2010, the division between the opposition and the administration wasn’t as strong.

ARMM results showed that the top 12 senators belonged to different parties: two from Lakas-Kampi-CMD ticket, 4 from the Liberal Party, 4 from the Nacionalista Party, and two from Pwersa ng Masang Pilipino (PMP).

More than the number of elected national officials, an administration’s influence is more tested at the local level.

The affiliation of those who hold power in provinces, congressional districts, and even down to cities and municipalities is important, as these areas can eventually maneuver the future of the ruling party.

According to National Citizens’ Movement for Free Elections (Namfrel) head Eric Jude Alvia, this can be related to the “equity of the incumbent.”

“We don’t know if it’s coincidence or not, but whoever is in power gets the most share of votes in the region,” he told Rappler.

Based on election results, ARMM voters have remained loyal to whoever carries the name and party of the incumbent president. From 2004 to 2013, 7 congressional seats went to candidates running under the parties affiliated with the administration, while one seat went to the opposition.

The only exception was in 2004 when a candidate from the Estrada-affiliated PMP won in the first district of Maguindanao; the lone district of Tawi-Tawi went to an independent candidate.

The administration’s hold on ARMM is also evident among provincial government officials. In the past 5 elections, more than half of those elected were connected with the administration.

In Maguindanao, for example, all 12 provincial seats were occupied by members of Arroyo’s Lakas-Kampi-CMD. In 2013, ARMM voters elected 51 provincial officials from the ruling Liberal Party.

“If you look at the people, the personalities, they are still the same through the years,” he said. “The difference lies in their affiliations.”

Most of these administration-affiliated officials are part of political dynasties in ARMM – one of the factors identified as reasons for the lack of progress in the region.

In fact, in the coming elections, at least 26 candidates for provincial and congressional seats come from well-established political clans. (READ: All in the family: ARMM political clans seek posts in 2016)

Alvia added that the way the region votes is determined by who has more access to resources. Those likely elected are affiliated with the administration because they can easily get support for their constituents.

This can be in the form of government programs such as the Pantawid Pamilyang Pilipino Program (4Ps) or other social programs. 4Ps is known as the government’s flagship poverty alleviaton program.

In 2015, the biggest number of 4Ps beneficiaries were in ARMM. (READ: Where in the PH are the Pantawid beneficiaries?)

Three out of the 5 ARMM provinces, meanwhile, are part of the list of focus geographical areas (FGAs) as stated in the 2016 Budget Priority Framework of the Aquino administration.

However, despite this being governed by politicians who support and are backed by the administration, ARMM remains to be the poorest region in the Philippines.

In 2012, for example, the Philippine Statistics Authority (PSA) found that 47 out of 100 families residing in the region were poor.

The upcoming 2016 polls may spell change as the current Mindanao favorite for president, Davao Mayor Rodrigo Duterte, is not from the ruling party.

LP-affiliated politicians have been reported to have jumped ship to support Duterte’s candicacy. Political survey results since 2015 show that the Davao City mayor is the most preferred presidential candidate in Mindanao.

These voters make up almost 23% of the Philippine voting population. In 2010, Binay won in Mindanao when he ran for vice president under PDP-Laban – the same banner Duterte is running under. (READ: Can Mindanao voters propel Duterte to presidency?)

According to Alvia, however, the difference of percentage points between Duterte and other presidential candidates can still be narrowed and results on election day may still turn out to be different.

“That gap may easily be surmounted by resources from the government,” he explained.

Given Duterte’s standing, will the election results in ARMM be different? Or will voters remain loyal and true to the administration? – Rappler.com