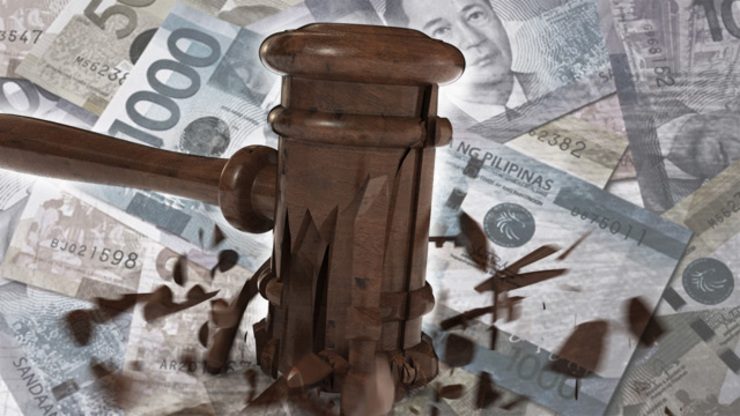 In the Philippines, what the law says does not always match what people do or practice.

The NGO had a capitalization of merely P900,000 and was formed only a year before the election, Rappler learned.

But when Rappler visited its declared office in 2013, we found that the supposed NGO office is actually a residential compound.

As of 2011, OKS Pinoy’s cash assets amounted to only P1.07 million, while its income was merely P336,501, according to the Philippine Center for Investigative Journalism (PCIJ).

Despite violating the law, Ejercito won a Senate seat in 2013.

The Corporate Code prohibits corporations from contributing to candidates, political parties, or any partisan political activity.

The law covers both stock and non-stock corporations.

NGOs and faith-based groups could only make such donations if they are not registered with the Securities and Exchange Commission (SEC), lawyer Maze Lutchavez-Vergara of the Commission on Elections (Comelec) Campaign Finance Office (CFO) told Rappler.

“And [as long as] they do not fall within the provisions of the Omnibus Election Code, and the donation is made in accordance with the law,” she added.

Aside from the Corporate Code, the Omnibus Election Code also prohibits corporate donors. It seems, however, that aspiring Filipino public servants are dead-set on ignoring these two national laws. No law, however, prohibits presidents or heads of corporations from making campaign donations.

“A president or owner of the corporation may make donations if it is made in his personal capacity and he is not included in the prohibited donors,” Vergara explained.

Many candidates, in fact, depend on corporate leaders for funding.

In 2010, Binay received P10 million from Darlene Webb Zshornack, owner of Planet Drugstore Corporation. Planet Drugstore engages in a private-public partnership with the Hospital of Makati. It began its operations in 2009, when Binay was still Makati mayor. (READ: How did Binay fund his 2010 campaign?)

The Omnibus Election Code also prohibits campaign donations from anyone “who holds contracts, sub-contracts, privileges, or concessions to supply the government or any of its division with goods or services.”

But how can we be sure that corporate funds are not merely being channeled through individuals – one possible loophole in the laws?

It is outside the Comelec’s jurisdiction to determine whether a donor used personal money or corporate funds, Vergara said. “The BIR will take care of it,” she added.

Another loophole, advocates say, is that pre-campaign contributions and expenditures are not covered by election laws. Hence, several candidates get away with violations.

Since such donations are made before the official campaign period – February 9 to May 7 – candidates re not required to reveal who these donors are. The laws are clear. A month after the election, all candidates, partylists, and political parties are required to submit their Statements of Contributions and Expenditures (SOCE) to the Comelec.

A candidate’s full list of donors is included in the SOCE.

In the 2010 and 2013 SOCEs, several candidates listed corporate donors. So what did the Comelec do?

“We already red-flagged the corporation donors for the 2013 [election],” Vergara of the Comelec CFO told Rappler. “Red-flagged means it’s included in our priority.”

“However, as per Commissioner Christian Robert Lim, the commissioner-in-charge for CFO, we haven’t done anything yet to prevent politicizing the matter,” Vergara continued.

“Come after elections, CFO will be taking action against these violators,” she added. “We’ll start the reports with SEC and file action for election offense.”

But why wait till the end of the elections?

To address the issue, the Comelec signed a Memorandum of Agreement with the SEC in October 2015. Its main points include:

Compared to the millions of pesos corporations fork out, a P30,000 penalty feels like a slap on the wrist, some might think.

Another penalty is the dissolution of guilty corporations. No corporation, however, has ever been held liable, to date.

In the upcoming elections, the CFO warns candidates that the Comelec will be stricter in implementing election rules.

The Philippines has many laws, but unfortunately, many of them lack teeth.