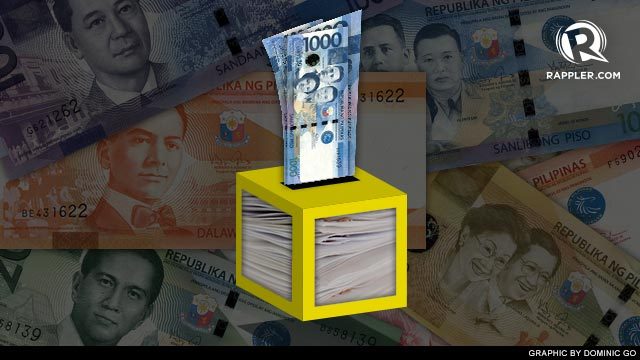 Facebook Twitter Copy URL
Copied
Will candidates stick to the rules on campaign spending? And more importantly, will the Comelec implement its rules?

MANILA, Philippines – The quick answer is no, however, Filipinos are not exactly known for sticking to the rules.

Campaign overspending is prohibited under the Omnibus Election Code. Such election offense merits imprisonment of one to 6 years, disqualification from holding public office, and removal of one’s right to vote.

Having laws in place, however, does not always stop candidates from doing what they want.

As of January 2016, there were 1,629 overspending cases nationwide, according to the Commission on Elections (Comelec), dating back to the 2010 and 2013 elections.

Such cases move at a very slow pace. Hence, many candidates are not afraid of overspending, thinking nobody gets punished anyway.

But in May 2014, the Comelec en banc disqualified former Laguna governor Emilio Ramon “ER” Ejercito for campaign overspending. And in February 2015, the SC upheld Ejercito’s disqualification.

In the 2016 elections, will local and national candidates once again dare to overspend?

In October 2015, the Comelec came out with Resolution 9991, a stricter set of rules on campaign finance.

Are candidates and their campaign teams aware of these rules?

Candidates cannot spend on everything they want either, only the following forms of expenditures are allowed by law: All candidates, political parties, and party-list groups are required to submit their Statements of Contributions and Expenditures (SOCE), detailing how they financed their campaigns.

SOCEs must be submitted to the Comelec CFO within 30 days after the election. First and second offenses merit administrative fines ranging from P10,000 to P60,000.

“Disqualification is not automatic, there’s still a need to institute an action against the offender. It will still undergo notice and hearing,” explained Vergara-Lutchavez.

Campaign finance-related election offenses are initiated by the Comelec CFO, however, anyone may file a complaint against violators (READ: Some candidates dishonest in campaign spending) “Candidates are not aware that campaign finance compliance enforcement has changed,” said Heaven Torres of Fearless PH, a company specializing in campaign spending.

“Most of the candidates believe that they will be ok if they just do what they did in the 2013 elections. This is a misconception,” Torres added.

In previous elections, some candidates were able to get away with “doctored” SOCEs, he said.

This year, however, the Comelec hopes to get rid of SOCE cheating through its stricter monitoring and its new online reporting system.

In addition, the Comelec said that it has been raising awareness by training its election field officers across the country.

“In fact, field officers spend out of pocket, they’re frontliners,” she continued.

As for national candidates, Vergara-Lutchavez said they have enough funds to hire lawyers who coordinate with the Comelec regarding campaign spending.

“There are publications of Comelec resolutions, press releases, word of mouth, and candidates can also call the CFO,” Vergara-Lutchavez explained.

Since the Comelec website is currently down, online copies of campaign spending rules are unavailable.

“Our advice is that if something is unclear, just reach out to field officers or call us directly,” she added.

Aside from lack of awareness, Torres identified other problems the government should address:

The Comelec CFO, however, said they are now working closely with the BIR, the Securities and Exchange Commission, and the Anti-Money Laundering Council to address such issues.

For this year’s elections, there are over 44,000 candidates nationwide.

Imagine a relatively small government office like the CFO taking on all these candidates.

The CFO is headed by Comelec Commissioner Christian Robert Lim; joining him are two lawyers and a 23-member staff in charge of reviewing documents.

“The reason why we haven’t boosted staffing is that it requires civil service approval. We have requested but the approval process is long,” said CFO lawyer Sonia Bea Wee-Lozada.

Since there are no local CFOs, the Comelec relies on its field offices for help, said Wee-Lozada.

Judgment day for both candidates and the Comelec will have to wait until June once all SOCEs are turned in.

Will candidates stick to the rules? And more importantly, will the Comelec implement its rules? – Rappler.com