MANILA, Philippine – Salvador Panelo will be the voice of Rodrigo Duterte for the next 6 years as he takes on the job as the president-elect’s spokesperson.

He will face mostly – and if the need arises, defend the president from – the media that will closely cover the new administration just like what he had been doing in the past.

As legal counsel of the Davao City mayor, Panelo was one of the most-sought-after figures at the height of Senator Antonio Trillanes IV’s charges of hidden wealth against the president-elect. Trillanes alleged Duterte’s bank account in the Bank of the Philippine Islands (BPI)’s Julia Vargas branch had transactions that amounted to billions of pesos.

On May 2, he represented Duterte at BPI where he tried to disprove the claims of Trillanes amid a huge crowd of supporters from both sides.

Panelo, however, is no stranger to dealing with issues that surround his clients. As a lawyer, he has handled quite high profile cases throughout his career.

Perhaps one of the most controversial clients Panelo has defended are the masterminds of the country’s worst case of election-related violence which left 58 people dead: the Maguindanao Massacre.

The single deadliest attack against the media was allegedly hatched to stop Esmael Mangudadatu’s bid for the governorship. He was up against Andal Ampatuan Jr, a member of the powerful Ampatuan clan of Maguindanao.

In 2014, Panelo was hired as defense lawyer of Ampatuan Jr. A Philippine Star article quoted him as saying that the Ampatuans were just “framed to seize political power.”

Only a year after in 2015, however, he withdrew as legal counsel as requested by his client due to “personal reasons.”

After 6 years, no convictions have been made.

In January 2016, when asked about the senator’s case during his Cavite sortie, Duterte said that he would “see to it” that Revilla would be granted bail if the evidence is “weak.” (READ: Duterte: If evidence is weak, let Bong Revilla out on bail)

Panelo was also one of the lawyers of the Marcoses who handled cases in relation to the goverment’s efforts to recover money stolen by the family. He was also quoted in a 2006 GMA report as saying that the Marcoses do not have any ill-gotten wealth.

Seemingly at odds with the position taken by Duterte against crime, Panelo also lawyered for former National Bureau of Investigation (NBI) civilian agent Martin Soriano who, in 2006, was charged with robbery and kidnapping.

In 2011, Soriano was convicted for kidnap-for-ransom and was sentenced to life imprisonment.

Panelo was also the defense lawyer of former Calauan, Laguna mayor Antonio Sanchez, who was convicted for double murder in 1995 in relation to the deaths of University of the Philippines-Los Baños students Eileen Sarmenta and Allan Gomez. Sanchez was sentenced to 7 terms of reclusion perpetua. 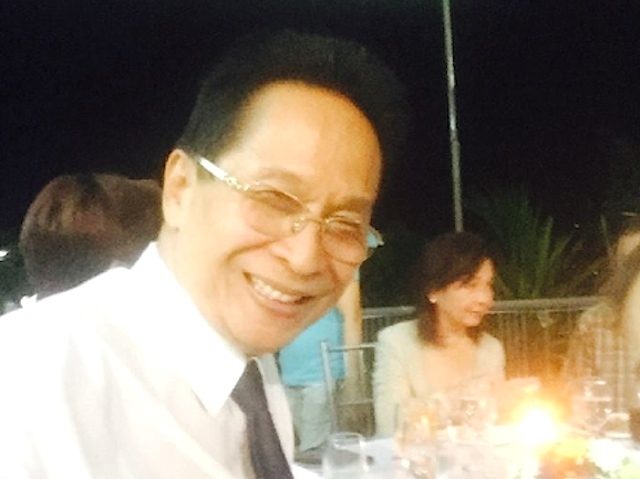 Hinting at his connection with the former president, Panelo attended Gloria Macapagal Arroyo’s birthday celebration in her La Vista residence on April 5.

Photos posted on a social media site on April 11 showed that he, along with other volunteers of Duterte, joined Arroyo as she celebrated her 69th birthday while on a furlough. On May 3, the same photos were set to private. (READ: Gloria Arroyo for Duterte?)

Panelo, however, is not the only Arroyo-connected close ally of Duterte. Aside from him, former press secretary and Presidential Adviser on the Peace Process Jesus Dureza is expected to oversee the peace process in Mindanao under the president-elect’s administration.

Newly-elected Davao del Norte Representative Pantaleon Alvarez, meanwhile, is being eyed by Duterte’s party, PDP-LABAN, as the next House Speaker. He was the Department of Transportation and Communication (DOTC) secretary under Arroyo and was linked to alleged anomalous deals involving the Ninoy Aquino International Airport Terminal 3. (READ: Next Speaker? Pantaleon Alvarez and the ghost of NAIA 3) – Rappler.com