‘Failed leadership’ in Comelec: A memo waiting to happen 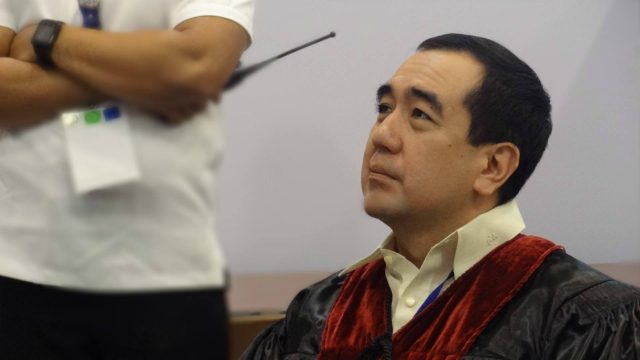 Facebook Twitter Copy URL
Copied
For insiders, the problem boils down to the ability of Andres Bautista, a former big boss in the corporate world, to run a collegial body where he has only one vote

MANILA, Philippines – Exactly 10 days before the May 9 polls, reporters covering the Commission on Elections (Comelec) noticed a big grayish poster on a wall of the Comelec headquarters.

Easily seen in front of the 8th floor elevator, the poster had letter cut-outs that read: “We love and support you…Chairman Andy.” It was from Comelec Chairman Andres “Andy” Bautista’s “Comelec family.”

Sources said the poster was meant to cheer up Bautista, who just came from a huge defeat – in his own backyard.

This poster, which spoke of being on Bautista’s “side,” was one of the earlier signs of discord in the poll body.

It’s part of an internal conflict that became evident on Thursday, June 23, after a memo showed all 6 Comelec commissioners criticizing Bautista for his supposedly “failed leadership.”

When that poster appeared on April 29, Bautista had just lost his bid to turn a number of malls into polling precincts. The Comelec voted 4-3 against his mall voting proposal.

It was the pet project of Bautista, a former law dean who used to run Shangri-La malls and hotels in the Philippines.

Bautista’s frustration was that of the 4 who voted against it, 3 used to favor mall voting.

They did so after former Comelec commissioner Gregorio Larrazabal warned that the mall voting project had become illegal. Larrazabal said the law prohibits the transfer of polling precincts less than 45 days before elections – and it was already less than two weeks before the May 9 polls.

This issue prompted Bautista, a law professor known for carefully choosing his words, to openly criticize his colleagues for their decisions.

His fellow Comelec members should maintain “stability in decision-making,” Bautista said on April 27. He said, “Dapat iniisip mo kung ano talaga ang iyong boto, kung ano ‘yung iyong paninindigan.” (You should really think hard about your vote, and what you would stand for.)

(Watch his statement in the video below)

That same day, in a move that surprised journalists, he also released the transcript of their meetings to prove that his colleagues previously agreed to mall voting. “Kayo na ang maghusga,” he said in a news conference. (You be the judge.)

He never forgot this issue until election day.

Doing his rounds on May 9, Bautista apologized to voters whose precincts had been slated to be transferred to malls. Shaking his head, he looked at a group of voters in Quezon City and said, “Bumaliktad ‘yung iba naming commissioner. Hayaan ‘nyo, sa susunod.” (Our other commissioners changed their minds. Don’t worry, there’s a next time.)

(Watch that scene in the video below)

Certainly, Bautista and other Comelec members faced other contentious issues as they approached the May 9 elections.

Bautista, for one, wanted the Comelec to buy bib vest uniforms worth P26.55 million ($574,300) for teachers serving as election inspectors. After initially agreeing to this, majority of Comelec members voted to scrap this project.

Bautista also proposed to hold the canvassing of votes at the Manila Hotel instead of the government owned Philippine International Convention Center (PICC). The Comelec ended up junking Bautista’s proposal and canvassing votes in PICC.

Most Comelec members agreed with Bautista, but it is worth noting who rejected this bid. One of them was Comelec Commissioner Christian Lim, the man who practically ran the May 9 elections as its steering committee head.

In other issues, who can forget the widely publicized rift between Bautista and Comelec Commissioner Rowena Guanzon?

In January, Bautista issued Guanzon a memo for filing an “unauthorized” comment on the case of then presidential bet Senator Grace Poe before the Supreme Court.

Quarrels like this in the Comelec had surfaced as early as last year, according to a Comelec observer who has had close and frequent dealings with the poll body.

That statement on “failed leadership,” in many ways, was a Comelec memo waiting to happen.

In their actual memo dated June 3, all 6 Comelec commissioners hit Bautista for his supposed failures as elections chief. These include his alleged inaction on the delayed allowances of teachers who served as election inspectors.

For Comelec insiders, the problem boils down to the ability of Bautista, a former big boss in the corporate world, to run a collegial body where he has only one vote.

This ability requires not only the brains of a Bar topnotcher and Harvard graduate (which Bautista is), but also a good relationship with fellow workers. While a Comelec chairman has only one vote like the 6 other commissioners, leadership in a collegial body is seen in the ability to set the agenda and influence peers.

Bautista’s predecessor, veteran election lawyer Sixto Brillantes Jr, was known to be savvy in persuading his colleagues and galvanizing support.

A source who once worked with Brillantes, in fact, said the former chair would rather drop a proposal of his, than get a vote that is less than unanimous.

While attacking outsider-critics, Brillantes was also seen to be consultative when it comes to colleagues.

In the case of Bautista, one complaint is that he sometimes doesn’t consult his colleagues for things that need their approval. One of his co-workers said that in their meetings, the chairman gets annoyed whenever he doesn’t get his way.

Just recently, an issue raised against him was his personal trip to Japan from June 23 to 26.

Bautista has been questioned by his colleagues for taking this leave of absence without the approval of the Comelec en banc, or the commission sitting as a whole.

The Comelec chairman said the law allows him, as head of his agency, to sign his own travel authority. He said the chairperson of the Commission on Audit and the Ombudsman also “sign their travel authorities as heads of their respective agencies.”

LOOK: Comelec Chairman Andres Bautista’s memo on his leave from June 23 to 26 for a personal trip to Japan #rstream pic.twitter.com/wzDIUN09GH

At the same time, Bautista is also perceived as slow in acting on key projects.

For instance, Parish Pastoral Council for Responsible Voting chairperson Henrietta de Villa said the Comelec lost focus on the mall voting proposal, which found itself back on the radar only when it was too late.

But the biggest accusation against Bautista, so far, involves his supposedly “failed leadership” as stated in the 6 commissioners’ memo on June 3.

In an interview with GMA News on Friday, June 24, he refuted this statement about “failed leadership.” How can that be, Bautista said, when the May 9 polls have been viewed as one of the most successful elections in Philippine history?

The US think tank Carter Center, for one, cited reports that the May 9 polls “marked a significant improvement over previous Philippine elections.” The National Citizens’ Movement for Free Elections, a poll watchdog, lauded the Comelec this year as well.

Under Bautista, the Comelec managed to run this year’s elections even as it faced one crisis after another. These issues include the Supreme Court (SC) decision stopping the repair of vote-counting machines – which he addressed immediately after assuming office in May 2015 – to another SC decision in March 2016 compelling the Comelec to issue voting receipts.

In his interview with GMA News, Bautista also denied that he refuses to meet with the 6 Comelec commissioners to discuss their concerns in their headquarters.

“Baliktad nga e. Ako nga ang parating nandoon at ang ilan ang hindi pumapasok,” he said on Friday. (It’s the other way around. I’m the one who’s always there, while some don’t report for work.)

In fact, Bautista often stresses that he employs a consultative method in running the Comelec. His consultations, too, often go beyond the poll body – as when he listens to critics like former Comelec commissioner Augusto Lagman, whom the short tempered Brillantes often scoffed at.

In any case, for recent issues hounding Bautista, stakeholders agree that dialogue is crucial.

Bautista said he has spoken with a number of commissioners and will continue speaking with the rest next week, after his personal trip to Japan.

Comelec commissioners also want to meet with Bautista soon to settle their issues.

Another source in the Comelec, who refused to be named, meanwhile cautioned the public against thinking that the 6 commissioners “are solid” against Bautista. “They are not,” he said.

He pointed out that 4 of 6 commissioners signed the June 3 memo “with a heavy heart,” saying they want to validate certain facts and observe “due process and material courtesy.”

The head of an election watchdog, for her part, hopes that recent issues in the Comelec will “be resolved internally.”

Rona Caritos, executive director of the poll watchdog Lente, said the statement about “failed leadership” can affect the Comelec as an institution.

(That has an effect on the moral of people inside Comelec, especially coming from a hard election that stressed out and stretched people.)

She added, “Ang hirap magtrabaho for a leader na ang tingin ng mga fellow commissioners in the en banc, is a failed one.”

(It’s hard to work for a leader who, in the view of fellow commissioners in the en banc, is a failed one.)

For now, the situation is “wait and see” for many Comelec employees. After all, it’s the first time in years – or the first time ever – for all Comelec commissioners to criticize their chairman in a memo bared in public. – Rappler.com