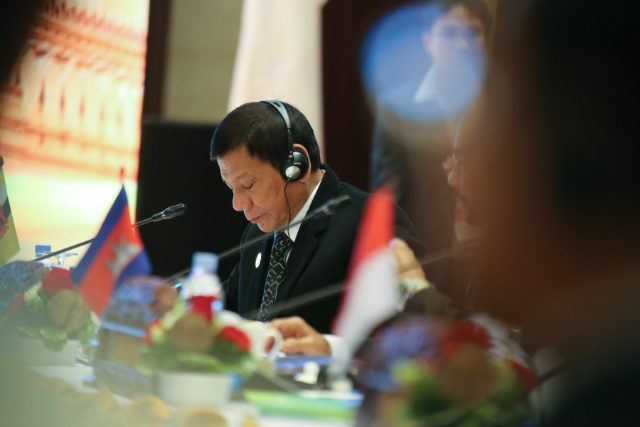 Facebook Twitter Copy URL
Copied
Based on Philippine laws, President Rodrigo Duterte is the country's chief diplomat, whether he likes it or not

MANILA, Philippines – In only 100 days in office, President Rodrigo Duterte managed to alarm or earn the ire of 5 international entities: the United States, the United Nations, the European Union, and most recently Israel and Germany.

Experts said this is unprecedented.

A diplomat, who spoke on condition of anonymity, said Philippine presidents usually get a honeymoon period from other countries during their first 100 days.

“I believe that it is not normal,” foreign affairs analyst Victor Andres Manhit also told Rappler, referring to the number of international entities speaking up about the Philippines recently.

After all, unless it involves global or regional security, countries rarely issue statements on the same issue involving another state – much less within a 100-day timeframe.

One of the times they do this, for instance, is whenever North Korea holds missile launches, prompting even a small country like the Philippines to issue 4 statements of condemnation in a span of two months.

The US, the EU, and the UN have all criticized the recent extrajudicial killings in the Philippines.

Israel and Germany, on the other hand, have denounced Duterte’s remarks saying he will “be happy to slaughter” 3 million drug addicts just as Nazi leader Adolf Hitler massacred 3 million Jews.

‘He did not run as diplomat’

Duterte, however, does not care.

Duterte said other countries have no right to interfere in domestic affairs.

He also called the US and the EU hypocrites for criticizing his war on drugs while neglecting human rights issues in their own backyard. He said America, for instance, needs to answer for the killings of “black people” while Europe is leaving migrants to die at sea.

Recently as well, Duterte told US President Barack Obama to “go to hell” – and the EU to “better choose purgatory” because there is no more place in hell.

On his choice of “colorful” words, Duterte said his mouth “cannot bring down a country.” He said he would rather focus on stopping illegal drugs.

Duterte also said he does “not intend” to become a statesman.

One of his staunchest allies, Speaker Pantaleon Alvarez of the House of Representatives, said of Duterte: “Hindi naman siya tumakbong diplomat e. Tumakbo siyang president.” (He did not run as a diplomat. He ran as president.)

Under Philippine laws, however, the President is also the country’s chief diplomat whether he likes it or not.

In a ruling in 2005, the Supreme Court said, “In our system of government, the President, being the head of state, is regarded as the sole organ and authority in external relations and is the country’s sole representative with foreign nations.”

“As the chief architect of foreign policy, the President acts as the country’s mouthpiece with respect to international affairs. Hence, the President is vested with the authority to deal with foreign states and governments, extend or withhold recognition, maintain diplomatic relations, enter into treaties, and otherwise transact the business of foreign relations,” the SC said.

Manhit, the Philippine managing director of the international think tank BowerGroupAsia, explained that the President is both head of government and head of state.

The foreign secretary, he said, is only supposed to follow the directions of the President, the chief architect of foreign policy.

Maria Elissa Lao, assistant professor of political science at the Ateneo de Manila University, said in an interview with Rappler: “There are two presidencies. One is domestic, the other one is the international, external presidency.”

The problem with Duterte, according to analysts, is that he still thinks like a city mayor.

Before assuming the presidency on June 30, Duterte served as mayor of Davao City for more than two decades.

Duterte is the type of President who – like a mayor – plans to devote an hour every morning to receive citizen complaints. He said he will call the subjects of these complaints to the Palace, and “will demand an explanation,” on top of telling each of them: “Putang ina mo.” (You son of a bitch.)

At the same time, Duterte is the type who makes major policy pronouncements off the cuff. Experts said these can be incoherent, inconsistent, and disastrous for foreign policy.

In a speech on September 28 in Vietnam, for instance, Duterte announced that the next military exercises between the Philippines and the US will be the “last” under his term.

Even his foreign secretary, Perfecto Yasay Jr, was caught off guard.

Minutes after Duterte said this, Yasay denied that Duterte ever did – “No, no, no, he did not say that at all.” Eventually Yasay admitted that he “did not hear” Duterte say that, as the foreign secretary said he was sleepy due to “jet lag.”

Duterte’s policy toward the US remains unclear, definitely not yet on paper. (READ: Duterte admin ‘independent’ from US, ‘bullied’ by China?)

Impact on OFWs, too

In any case, experts view Duterte’s undiplomatic ways as a cause for concern.

In an article on Vera Files, former Philippine representative to the UN Lauro Baja said: “Foreign policy and effective diplomacy cannot be conducted through press conferences and as part of off-the-cuff remarks in media interviews. It is neither good policy nor strategic diplomacy to say sorry and apologize later after gaffes.”

One of Duterte’s problematic statements, for instance, is about “crossing the Rubicon” with the US and wanting to establish stronger ties with China and Russia instead.

“Any good diplomat won’t put all their eggs in one basket. So you have to also be careful with the kind of statements that you’re making,” Lao said.

“We’re not a big state,” she explained. “You also have to measure what kind of resources do we really have in order to back up foreign policy statements.”

Lao added: “As President, you look after the interests of your country. And there is a language to diplomacy.”

She was also asked about the popular sentiment that it is not the President’s job to speak diplomatically, and that people should look at his actions, not his words.

Lao answered, “Ang tanong ko, kung hindi ‘yun trabaho ng Pangulo, kaninong trabaho ‘yon?” (My question is, if that is not the job of the President, whose job is it?)

Manhit, who is also president of the Albert del Rosario Institute for Strategic and International Studies, then described Filipinos as “global citizens” because of overseas Filipino workers (OFWs).

“You have to realize that you cannot look at your world domestically only, because how people see us internationally might affect the day to day lives of our OFWs, might affect the investments, the jobs, of our people,” he said.

Manhit added that the government can only bring “greater foreign investment” into the Philippines “if we are respected in the world.”

“And who is our symbol to the world? That’s our President.” – Rappler.com